There’s a subsection full of amazing cheese breads as well, not just this recipe. Almojábanas, for example, are like a circular, cheesy cornbread. Brazil also has a well known cheese bread called pão de queijo. The further you go down the Colombian rabbit hole of cuisine, the more hungry you will get.

Masa is used in more than just this recipe. Tortillas, tamales, pupusas, possibly the cheesy gordita crunch from Taco Bell, even tacos! All traditionally use masa harina. So, if you want to do some more Latin American cooking, you will go through the bag pretty quick.

I think it’s better to use all cassava flour if you can’t find any masa. Don’t substitute cornmeal whatever you do. I tried that, and cornmeal makes it very grainy. Cassava flour is also called cassava starch, tapioca flour, or tapioca starch. It’s all the same thing.

This might surprise you, but we want as much cheese as possible. In a previous attempt I wimped out and did like a 2 to 1 flour to cheese ratio. In the end, I discovered pan de bono should be basically more cheese than flour.

If you can’t find Colombian cheese, a mild feta or ricotta cheese will work in place of the queso fresco. It just needs to be soft enough to blend easily with the tapioca flour and masa.

Finally, sprinkle the salt, milk, and egg in the bowl. Stir thoroughly until a sticky dough forms. It should hopefully hold it’s shape, but if not it isn’t a big deal. You will end up with a flatter bread like mine instead of the round balls you might find on Instagram.

Most importantly, grease your baking sheet! If you put the bread on aluminum foil without the grease they are impossible to get off! Bake at 400 degrees F for 20 minutes, or until golden brown on top. From what I understand, cassava flour and masa don’t need to cook like normal flour does. So, if it seems like underdone dough in the middle that’s fine.

If you’re interested in more Latin American recipes, try my Peruvian lomo saltado and papa a la huancaina! Or for something from Honduras, baleadas! 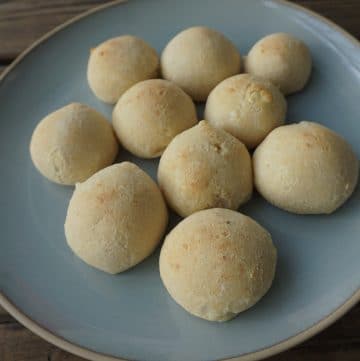