Recently, I asked some friends if they had any suggestions for recipes I should make. One of my college friends suggested lomo saltado, not a dish I was familiar with. Lomo saltado is best described as a Peruvian stir fry with Chinese roots. That’s right. It’s Chinese fusion!

Apparently, Cantonese immigrants came to Peru around the turn of the 1900s. They first settled around Lima, the capital of Peru. Similar to how orange chicken was made to suit American palettes, the Chinese immigrants combined Peruvian ingredients with Chinese cooking ideas.

This Peruvian-Chinese fusion cuisine is known as Chifa. The first such restaurant opened in Lima in about 1920. Today, there are thousands all over the country. If you want to try some when you visit, the Chinatown of Lima is located near Capon Street in Barrios Altos.

So what part of this dish is Chinese? This dish traditionally has soy sauce, white rice, and sometimes vinegar (I didn’t use any for this recipe). The rest of the ingredients are quintessentially Peruvian. Potatoes and tomatoes are indigenous to South America. Onions, according to Wikipedia, probably come from Central Asia originally. Who knew? However, this recipe will feature a Peruvian staple. Aji amarillo paste.

Aji amarillo is a yellow pepper from Peru that is common in many dishes there. It isn’t too spicy. Somewhere between a chili and jalapeño. You can find a premade paste in the Latin aisle of many grocery stores. I decided to have some fun and tried to make a homemade version. Of course, I couldn’t find any aji amarillo peppers. If you want to make your own, I’ll walk you through it. If not, skip the next part.

So, we are going to substitute pablano and jalapeño peppers for the original. First, cut the peppers open. Remove the tops and most of the seeds. Depending on how much spice you like, I would leave some in. The seeds carry most of the spice. Boil the peppers for about 10 minutes. Then, put them in an ice bath. Peel off the outer layer of skin. Put them in the blender. Slice up a ripe mango and toss that in the blender as well. Add some salt and pepper to taste. If it comes out not spicy enough, you can add some hot sauce.

Make sure to taste your paste. Don’t stop until you are satisfied. Add whatever you think it needs to make you happy. This sauce will keep a while in the fridge. Feel free to make other Peruvian dishes with it. I will have another one coming out next week. And you get to add cheese to it!

First, a note on food prep. I like to cut my veggies first. That way, you don’t have to dirty a second cutting board to cut the meat. You also won’t overcook anything because you haven’t chopped an ingredient yet. So, after the veggies, cut the steak into strips. Season it with salt and pepper and Worcestershire sauce. You can do this as early as you want, at least 30 minutes before cooking is preferable. Leave the meat out of the fridge for an hour as well. This way, you don’t end up with dry meat from overcooking.

Start your rice now. We want to make sure all the food is ready at the same time. Fill a pot with about 1 Liter of vegetable oil. Turn the heat to medium high. Cut your potatoes into french fries. Test the oil to see if it is hot. No, don’t use your finger. Flick a drop of water into the pot. If the oil crackles and hisses loudly, it is ready. Add your fries a few at a time. Lay them in away from you. This way, the oil doesn’t spatter towards you when you drop them in. This will give you about 10 minutes to make the stir fry, which is all we need.

Add 2 tablespoons of oil to a skillet and heat it up on medium. Once hot, add your steak strips. Let them sit a bit and develop a nice browning on at least one side. We are going to fully cook the meat now and add it back in at the end. Don’t overcook the meat. Shouldn’t take longer than about 6 minutes. Then, take the meat out. Add your onions. Fry for 5 minutes.

Add the tomatoes, garlic, and aji amarillo paste. Add 2 to 3 tablespoons of the paste. Depends on how spicy you like your lomo saltado. My paste came out a little mild so I added more. Fry for another 6 minutes and let the flavors meld. If your fries finish around here, take them out and plate them. Blot some of the oil off with a towel if that concerns you. Salt them liberally. Salt sticks best to fresh fries.

Last, add the rest of the ingredients. Soy sauce, parsley, salt, pepper, steak. Just cook for 1 minute so that the flavors combine. You can plate it with the fries on the bottom or stir them together. Add a scoop of rice. Put a little pepper paste on the side for looks. Finally, garnish over the top with some fresh parsley. My take on lomo saltado.

Please comment below if you try the recipe and let me know what you think! If you want to try another famous Peruvian dish, how about papa a la huancaina or salchipapas? Or, for something from another continent entirely, makloub from Tunisia. 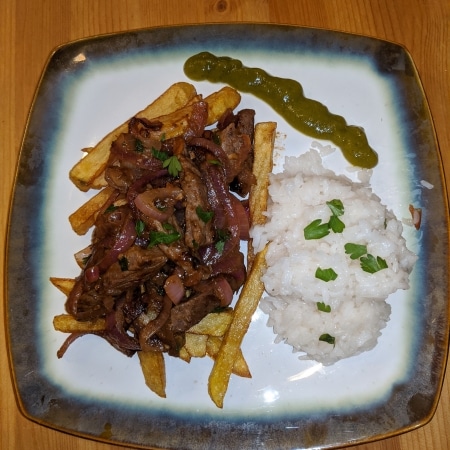