This wonton egg noodle soup is part of my ultimate dumpling guide project. Check it out if you haven’t had the chance yet!

Why add wontons to a soup? Wontons are best when they accompany a flavorful broth. The rich, uniform flavor of the broth is suddenly broken when you bite into a wonton. Similar in theory to why noodles are great. They provide a textural and flavorful difference from the broth.

Jiaozi, or pan fried dumplings, usually have a thicker wrapper and are pan fried. They aren’t served in soup due to the thicker wrappers, so they usually come with a dipping sauce on the side.

Since we are using premade wonton wrappers, I don’t think you will need any tips for that. We used an egg wash instead of water to close them, but besides that nothing crazy. Why didn’t we make the wonton wrappers by hand too? Cause that would be an awful time. The rest of the wonton egg noodle recipe is plenty to do.

This is where most of the trouble will come from. First, we need some baked baking soda. Yeah, you read that right. Apparently, this causes a chemical reaction in the baking soda. You will know you did this right, cause your dough will become a darker color, almost brown.

It is important that you don’t add much extra water, if any at all. The dough will be fairly rigid and hard to work. That’s good, cause it won’t stick together, which makes it easier to cut the noodles.

It’a alright if you end up with some thick noodles. Mine were. They got some chew to them too. I think this works out because of the flavorful broth though. If you want to skip the noodles for the wonton egg noodle soup that’s okay too. Just make wonton soup!

The filling for these wontons can be changed if you want for dietary reasons. It is fantastic as is though. The fat from the pork brings out extra flavor from the shrimp that you normally wouldn’t get.

Also, feel free to change up parts of the marinade. If you don’t own Chinese five spice powder, no sweat. You can leave it out, or add something you do own. Garlic powder, maybe even like a Cajun seasoning. The important thing is that you enjoy yourself while cooking the wonton egg noodle soup.

For the soup, we wanted to make a really flavorful broth. So, we added pork bones, shiitake mushrooms, and dried shrimp to premade chicken broth. You don’t have to do all of this, but having at least 2 of these ingredients will take your wonton egg noodle soup to a new world of flavor.

If you want more soup recipes, how about pomegranate soup from Iraq? Or for another classic Chinese soup, how about egg drop soup? Or tang yuan for a dessert soup! 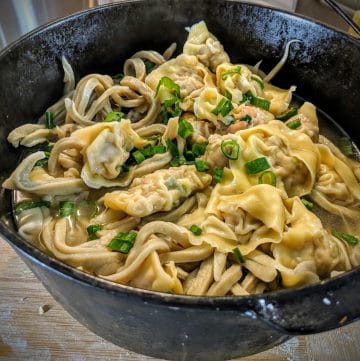