So this succotash recipe isn’t a family heirloom or anything. It started because I bought way too many beets for my pomegranate soup, and I needed to figure out what to do with them. What are beets good for? Can you think of something without Googling it? That was my problem too.

Usually, succotash is made with corn, lima beans, okra, and tomatoes. It gained popularity during the Great Depression in America. Why? Meat is expensive and these veggies were some of the cheapest ingredients around. Also, people would throw in whatever they happened to have. So I felt like adding beets because I have them would be true to the spirit of succotash.

I feel like the recipe for this one is pretty easy and informative. Try and get each veggie tender before you add the next one. Especially the okra. Underdone okra is kind of crunchy and a weird texture. So be sure to taste the okra specifically before you serve.

Another great part about this succotash recipe is that it’s completely vegetarian! How does that translate to cooking? You can taste the dish at any time you want. You don’t have to worry about raw meat. Constantly taste the dish, that way you won’t be surprised at the end if it needs more salt or pepper.

What Part of the Beet Should I Use?

Every part of it! I thought just the beet root was the desirable part of the plant, but the stem and leaves are also edible. So, I peeled the root with a peeler, then diced it. I sliced the stem, and I chopped the greens. You don’t have to use them, but I think the greens add a colorful contrast to the succotash as well.

Do I Have to Use Beets?

Not at all! If you want, you can subtract the beets completely from this succotash recipe. If you do, I might suggest adding another can of lima beans. Otherwise, the corn would probably dominate the flavors of the dish.

Can I Make This Vegan?

I don’t see why not. Instead of butter, try 4 tbsp of olive oil. It shouldn’t change the flavor that much. It might make the dish spicier though, since you won’t have the dairy to counteract the peppers.

I didn’t think so, and I’m a pretty big wimp when it comes to spice. I like it but it makes my nose run like a faucet. Sorry for that imagery. The spice level is a mild kick, just enough to let you know that it’s there. If you are nervous about that you can use jalapeno or leave it out all together.

What Would Pair Well With Succotash?

I would think any meat main course. It’s already all the vegetables you need to eat in one day, so I wouldn’t pair it with a veggie main course. A pot roast could be tasty, maybe a pork chop. As far as recipes on here so far, the Coca Cola chicken wings would probably be best. Their sweetness would be a great contrast to the slight spice and freshness of the succotash.

Yeah, there’s no flour in here. Or any other succotash recipes I’ve looked at. You are completely safe here!

Feel free to comment below if you have any other questions about the recipe. Or if you would like to give it a review, that always helps! If you haven’t seen my recent guide to curries from around the world, you should check it out. It’s probably my best content to date! 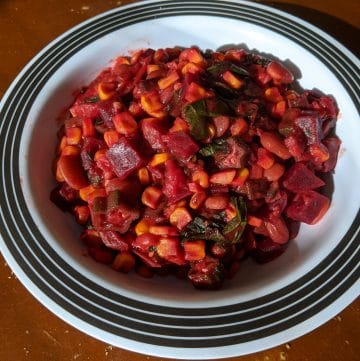