Full disclaimer, I’m not a vegan or a vegetarian. But I know a lot of people that are, including my roommate. Odds are, you know at least one. 1% of the US population was vegan in 2014, up to 6% in 2017. I’m guessing that number will continue to rise as veggie and vegan friendly foods become increasingly available. The Impossible Whopper is a great example and is the inspiration for my vegan burger recipe. Can we make a vegan burger good enough that you can’t tell the difference?

First, I’ll walk you through my ingredients. The buns are simple. Pick out your favorite from the bakery. Unless it has honey, milk, or butter in it, it should be vegan. For the patty, I used Impossible meat. The meat is completely plant based. They did feed it to animals to see if it was safe for humans to eat. So, I don’t know that violates anyone’s specific code. I’ll just put it out there. Obviously, we can’t use cheese. But we need something to add that depth of flavor.

Enter mushrooms. Mushrooms have a deep savory profile, which is why they are frequently used to add flavor to soups and stocks. I went with shiitake. Of course, a burger isn’t complete without some onions. I sliced some fresh white onion and put that on top. Last, a large helping of barbecue sauce. Be careful here. Not all BBQ sauce is vegan, since honey is a common ingredient. Some quick searching shows Sweet Baby Rays is. They are at most grocery stores as well. I decided to keep it simple, but feel free to add some tomato and lettuce slices if you want to go all out for Valentine’s Day.

First, we will start with the mushrooms. Add a little olive oil to a skillet and heat it on medium. Add your mushrooms. Sprinkle with salt and pepper. Any other seasonings are up to you. I recommend either soy sauce or paprika. Don’t stir them too often. Let them char on the bottom a little bit. Cooking should only take about 6 minutes. Leave any oil in the skillet, that’s free meaty flavor we want in our patties.

Always add salt and pepper to your meat before you cook it, and fake meat is no exception. I also wanted to add a little marinade. Normally, I would use something savory like oyster sauce or Worcestershire, but those aren’t vegan or even vegetarian. So, I went with soy sauce instead. You don’t need to marinate for a long time, only about 30 minutes. Most importantly, take your meat out of the fridge well before you cook it. We don’t want to overcook it on the outside because it’s still raw on the inside. Add it to your still hot skillet. If there is no oil left, add some more and wait for it to get hot. Let the “meat” cook for 4 minutes, flip, and cook another 4 minutes.

In a separate skillet, toast your buns. Add a little olive oil, let it heat up. Place the buns, let them sit for a couple minutes. Check them. Once they are toasty enough for your standards, take them off. If you are a vegetarian you can use butter instead of oil. Other people say you should toast in the oven at 350 F for about 5 minutes. If you do that, put the oil or butter directly on the bun.

Finally, the easiest part. Just slice an onion. I don’t think I need to explain that. The best to use would be either white or red onions. White onion is sweeter, while red onion will provide more of a bite. I used raw onions but if you want to saute the onions too, more power to you. Thanks for reading my vegan burger recipe! If you want more vegetarian ideas, might I recommend scallion pancakes? Or, for the carnivore in your life, my homemade orange chicken. 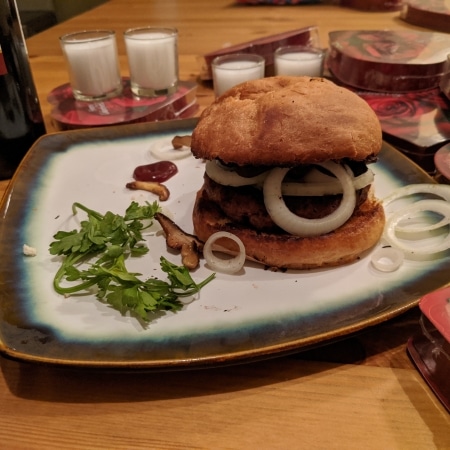