What should I do with this turkey carcass? I just finished recreating turkey legs from Disneyland, which required buying a whole 20lb turkey. I decided to throw the carcass in an Instant Pot with some carrots and leek, making a great broth in under an hour. A day later, I figured out what I would do with it, make turkey ramen.

Most of the ramen I have made so far started with chicken broth as the base, so I figured turkey wouldn’t be that different. I forgot to add salt when making the broth, which made it the perfect candidate to turn into shoyu turkey ramen. If you want a more traditional Japanese ramen, I have plenty of those too.

Shoyu is one of the four main types of ramen, the others being miso, shio, and tonkotsu (the only one that requires pork broth). What sets shoyu apart? Soy sauce, and a lot of it. Starting with a broth that’s low sodium allows you to add more soy sauce, and there’s more flavor to soy than just the saltiness.

First, I’ll start with the plain old turkey broth. It was the easiest broth of my life. All you have to do is roast a turkey first (I don’t count that as a step). Then, I threw the turkey carcass into an Instant Pot. I sliced up 2 carrots and a leek as well. That’s all. If you don’t have a pressure cooker, this will probably take a couple hours. Normally I would have added salt too, but I think I was actually out of salt at the time.

Now, we transform that turkey broth into a shoyu turkey ramen broth. I used a little wakame (dried seaweed) and bonito flakes (dried tuna) to enrich the broth. These are common ingredients in most ramen, as part of the dashi (a Japanese soup base). Also, a lot of soy sauce. We are making shoyu ramen, so this is a necessity.

Next, we have a little fun. You can vary the ingredients here. I wanted to add a deep savory flavor, so I added some shiitake mushrooms. Also mirin, for a little bit of sweetness. You can change these up if you’d like. The broth should be pretty flavorful already. Light, too. I had no problem slurping the whole bowl, even after I felt full.

Shiitake mushrooms and leeks are popular shoyu ramen toppings in Tokyo, so I included them in my turkey ramen. The leeks require no care, just slice them up. For the mushrooms, I sauteed them with a little sesame oil, then added soy sauce to finish. It brings out a deeper, rich flavor that compliments the soy already in the broth.

Obviously, the turkey because I had leftover turkey. It also tastes right at home in this turkey ramen broth. Last, a soft boiled egg to visually tie it all together. Naruto fishcake is also popular in Tokyo, but I haven’t been able to shop for it. Bamboo shoot is big as well. To be honest, I have that in my pantry but I keep forgetting it’s in there.

For another noodle dish, how about Chinese wonton egg noodle soup? Or if you want some appetizers, check out my guide with over 100 dumpling recipes! 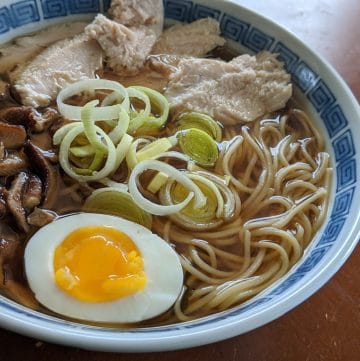