Popcorn is a worldwide phenomenon, enjoyed by people all over the world. Especially at theme parks. The most popcorn obsessed place in the theme park world might surprise you: Tokyo Disneyland. I’ll be covering one of the popular flavors they have there, soy sauce and butter popcorn.

They have all kinds of flavors: milk tea, strawberry, orange marmalade, blueberry, garlic shrimp, white chocolate, and cream soda to name just a few. I settled on soy sauce and butter popcorn because, number 1, it’s really popular there. Number 2, I think most people enjoy the flavor of soy sauce and it should be simple to make at home.

Finding The Popcorn At Disney

I haven’t been to Tokyo Disneyland personally, but from what I have read, the popcorn flavors available change from day to day. There are all kinds of variables involved: season, temperature, even the newest live-action adaptation. I think soy sauce and butter popcorn is usually available, considering it’s a strong neutral flavor. Disney has popcorn maps to tell you what is available and where that day.

If you’re stuck in the good old USA, Epcot’s Festival of The Arts seems like the best time for popcorn at Disney World. There are many unique flavors sold then, including truffle, maple bacon, and churro.

I used to only make popcorn in the microwave, but making it on the stove is actually really easy. Just get a big pot or saucepan and add 2 tbsp of your favorite oil. Heat it up. Next, drop in a couple kernels and put the lid on. Once the kernels begin to pop, add 1/3 cup of popcorn kernels.

Now, start shaking the pot or saucepan. You will probably need the lid on, otherwise popcorn will start flying everywhere. Keep shaking until most of the kernels are done. There will always be a couple that don’t pop, so don’t risk burning the majority to save a few.

Finally, is the most fun part. I’ll start with how to make the soy sauce and butter coating. Then, I’ll ponder some other possible flavor combinations. Mix 2 & 1/2 tbsp of melted butter (salted and unsalted both work) and 1 & 1/2 tbsp of soy sauce. Pour it over the popcorn and mix thoroughly.

Taste the soy sauce and butter popcorn. Then, add salt accordingly. This part is really important. Don’t salt it before adding the soy sauce or you could get super salty popcorn.

Curry is another cool flavor that I think could work well at home. For curry popcorn, I would suggest the same amount of butter, with maybe 1/2 tbsp of curry powder instead of soy sauce. Start from there and keep adding till you get closer to your desired level of curry flavor. Also, I have a hunch that garlic powder and cheese would taste great here too.

I’ve seen buffalo and blue cheese popcorn at Epcot before too. For that, I assume you would use buffalo sauce, maybe cayenne pepper and some crumbled blue cheese.

I’ve got several other theme park recipes on the blog as well! For something sweet, try my Dollywood inspired cinnamon bread recipe. For something savory, cheeseburger spring rolls! Or, for something crazy, how about a giant donut? 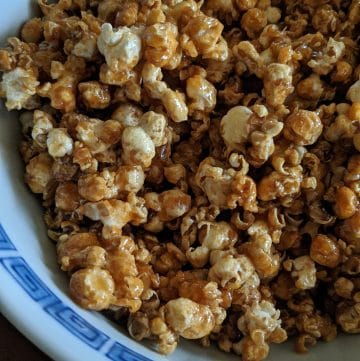 Previous Post: « How To Make Dollywood Grist Mill Cinnamon Bread
Next Post: Disneyland Turkey Legs: How To Make At Home »