S’mores fries and pizza fries are one of the most popular foods during Halloween Horror Nights at Universal Studios. It’s also one of the easiest theme park snacks to make at home!

Pizza fries are made exactly as you think. Make French fries then add pizza sauce, cheese, pepperoni and sausage if you like.

S’mores fries are a little more effort. If you want to be true to the theme park interpretation, make sweet potato fries instead of regular fries. Then, douse them with chocolate, add crumbled graham crackers, and cover with marshmallows. Toast in an oven til the marshmallows look like they’ve been roasted on a campfire.

I’ve fried a lot of potatoes recently, and it’s not hard to do at home at all. See my lomo saltado, papa a la huancaina, apple fries, fataya, or kebapche for ideas on recipes that use fries by the way. Super versatile side!

The basic idea is get oil hot and add the fries a little at a time. I’ve learned that if you add them all at once the oil can overflow from the moisture released from the potatoes.

Some people swear by doing the twice fried method, once at a lower temp and then at a higher temp. This is supposed to get them extra crispy. I haven’t tried that method yet, but Guy Fieri says it works, so it must be good.

My Changes to S’mores Fries and Pizza Fries

I think the place to focus for pizza fries should be on the pizza sauce. I used canned tomato sauce without really thinking. After tasting it, that’s not really the same as pizza sauce. I would suggest adding some salt and oregano. Also, I just realized canned pizza sauce is a thing. The moral of the story is taste your sauce before covering the fries with it.

The pizza fries at Universal Studios also have sausage in them. For that, I would suggest using a precooked sausage like andouille. Why? I don’t know how much the oven will cook it. Cooking sausage completely on the stove then putting it in the oven could make it dry.

Like I said above, I ended up using russet potatoes instead of sweet potatoes. Sweet potato fries are a little sweeter naturally, so that makes them a good choice for the dessert fries. However, I forgot to buy sweet potatoes.

If this happens to you, no need to fret. I added a little bit of maple syrup to it to add more sweetness. I have no idea if that was necessary, but the s’mores fries were delicious.

Keeping with my theme of forgetfulness, graham crackers. It slipped my mind that they are part of s’mores. I think they are a worthwhile addition though. It would add a little textural difference.

Also, I like chocolate chips over chocolate syrup here. I think you get a higher quality chocolate that way. It melts and coats the fries without being absorbed completely by them, maximizing the flavor. Instead of tiny marshmallows, I used regular size and ripped them in half. This gives bigger bites of marshmallow.

If you’re into theme park food, check out my butterbeer recipes! Or, for another deep fried dessert, try my pongu lumpia from Animal Kingdom! 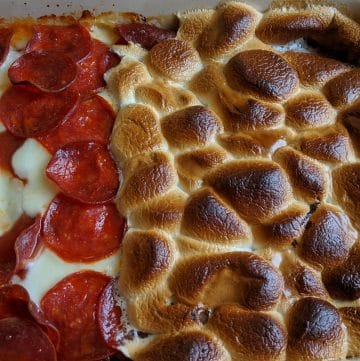 Previous Post: « Pongu Lumpia Is The Food Of The Future (And Avatar)
Next Post: How To Make Dollywood Grist Mill Cinnamon Bread »