Shio ramen is the oldest style of ramen in the world. This ramen predates the existence of miso paste and soy sauce, so it gets most of its salty flavor from, well…salt.

Ramen was devoloped from noodle dishes the Chinese brought to Japan during the Meiji Restoration. However, it is impossible to say where the first bowl of true shio ramen was served. While no one can agree on the past, in the present, Hakodate is the home of shio ramen.

Hakodate is the third largest city on the island of Hokkaido, which is also where miso ramen was invented in the 1960’s. Yet for some reason, while miso and shoyu have dominated the worldwide ramen market, Hakodate has kept the tradition alive. In the name of modernity, I’ll show you how to make it in 30 minutes. What? I’m not in Hakodate.

Miso paste and soy sauce generally add richness to ramen broth. Since I couldn’t use any for shio ramen, I decided to add some pork fat. I think it adds a little extra flavor.

Normally, the broth would be made by boiling chicken bones and adding a dashi (Japanese broth of seaweed and bonito flakes). This would take a couple hours, so I used premade chicken broth instead. Shio ramen literally means “salt ramen”, so use low sodium chicken broth. We are going to add plenty of salt later.

I did my best to keep it simple. Fry 3 cloves of garlic in 1 tbsp of sesame oil for 2 minutes. Add that to your pot of boiling broth. Add some dried seaweed (nori) and bonito flakes (dried tuna). Pour in 2 tbsp of sake. Add a tbsp of pork fat cause I bought 8 lbs of pork butt and want to do something with it.

Let this simmer on medium low heat for about 20 minutes. Last, pour in a lot of salt. I would wait till a couple minutes before serving to add the majority of salt. Otherwise, some of the water will evaporate and you’ll discover why it’s called shio ramen. Also, strain the broth before serving to get the bonito and seaweed out. Some people might not like the gooey texture.

The toppings are each fantastic. Spinach provides a faint bitterness, which is contrasted by the slight acidity from the vinegar in the bamboo shoots and the richness of the pork and egg.

Bamboo shoot doesn’t really taste like much out of the can. It comes precooked, but by adding some sauces you can make them shine. Soy sauce and vinegar worked for me!

How To Roast The Pork

To simplify the recipe card I thought I would make the pork optional, cause that could be a recipe by itself. However, if you want to make it, I’ll tell you how here.

The best cut of pork for shio ramen, and all ramen, is pork belly. It has a lot of fat, which means a lot of flavor. Loin can also work, but I enjoy butt (giggle here). I mean it! There’s a lot of fat content and it’s thicker, so you can get nice browning on the outside and still have a tender and juicy inside.

For the marinade I used a variety of sauces, including soy sauce, mirin, sake, Worcestershire, paprika, salt, even a little Cajun spice. Use whatever you like, but also what you might happen to have. Honey and brown sugar are also great ideas. The longer you let it marinate the more the flavor will penetrate the pork.

When roasting the pork, a general guideline to bake 40 minutes for every lb it weighs at 300 F. So, if you’re making 2 lbs, at least 1 hour and 20 minutes. Always check to see if the inside gets up to the safe internal temperature, at least 145 F.

For more Japanese recipes try my octopus balls! Or if you’re feeling really hungry, how about dumplings from 45 different countries? 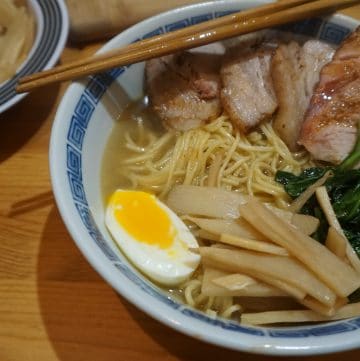