Seafood ramen is a popular variety of the more traditional miso ramen, which was invented in Sapporo! Sapporo happens to be the capital of Hokkaido, which is the second largest island of Japan, as well as the northernmost province.

Hokkaido is basically a winter wonderland, and that’s reflected in their miso seafood ramen. What do you want during a harsh winter? Something hearty, right? As much protein and fat as possible. And obviously, piping hot.

This really hits the ticket. I never thought butter would be a good ramen topping, but it blew me away (see my ramen guide for more topping ideas). The squid and scallops were tender. The broth was fantastic without spending 4 hours making a bone broth. Speaking of taking a long time, let’s break down the recipe below.

There are a lot of ingredients to this recipe, luckily a lot of them can be reused or re-purposed (drink your leftover sake). If you see something you aren’t a fan of (like squid), you can leave it out or make your own substitutions.

The broth is the most complex part of this seafood ramen. If you want to make a bone broth to start, you can do that, but if you’re feeling lazy like me, start with premade chicken broth. The other essentials are miso, sesame oil, garlic, bonito flakes, ginger, mirin, shiitake mushrooms, sake, and soy sauce. I also used dried kelp, dried anchovies, and dried shrimp to give the broth that concentrated Sea of Japan flavor (which might be unnecessary if you use bonito flakes).

I sauteed the dry ingredients in a skillet with a tablespoon of sesame oil. This releases their flavors before adding them to the broth. This is crucial, don’t skip this step. It only takes about 5 minutes and will result in a much more flavorful seafood ramen.

If you are using dried kelp, you need to reconstitute it in a bowl of water for about 10 minutes before adding it to the broth. Miso has a really long shelf life, like a year! Not really advice, I just think that’s really cool.

Other Thoughts On Seafood Ramen Broth

It is possible that the fish and the shrimps won’t dissolve. You can still eat them, personally I like it, but if that grosses you out you can strain them out. Let the broth simmer for at least half an hour first, so it has the chance to absorb most of the flavor. Also, if you use low sodium chicken broth to start, you need to add more soy sauce than the seafood miso ramen recipe calls for.

I chose to use squid and scallops as the main stars. Both are used at local establishments in Sapporo. Crab is too, but I don’t have the budget for that yet. This was honestly my first time cooking with squid. I was worried, but it was really easy.

If you get just the tentacles all you have to do is drop them in the broth and boil for about 4 minutes. If you get whole squid then you have to clean them, and that gets messy. Also, no one will love you if you smell like squid. Ever. Again.

I’ll try to make my own noodles in the future, but for now I’m using the premade stuff. You should be able to find some quality ramen noodles at an Asian market; cheap too! Don’t buy the instant ones though. All you have to do is boil the noodles in a separate pot of water and drain them. Then, add them to your bowl with some broth, and serve your seafood miso ramen.

If you’re interested in other Japanese recipes, try my akashiyaki (fried octopus balls). Or, if you’re feeling soups, how about wonton egg noodle soup? I made the noodles by hand! 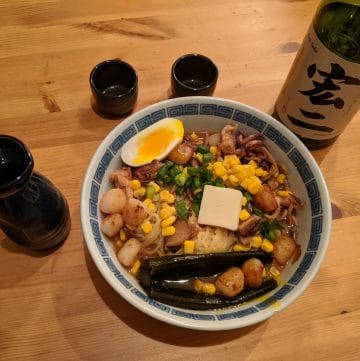