Most people when they think of pancakes, they only think breakfast, maple syrup on the top. I did too, but one day my roommate introduced me to Chinese scallion pancakes.

Scallion pancakes aren’t sweet. I’m not sure if they qualify as breakfast food. What they are is savory, fatty, and flavorful. The best way to describe the taste is to imagine a thick sour cream and onion potato chip, and that’s about as close as I can think of.

Next, let’s talk about the ingredients. A great part about these is their simplicity. Flour, water, vegetable oil, scallions, chives, and salt. In all likeliness, you already have all of these in your pantry, except for the fresh scallions and chives. How much are these? Scallions are 50 cents at Walmart right now. Chives are $1.98. So, it’s a real possibility for most of you to make these for less than $3. That is crazy!

No, I’m not talking about Joel Embiid. We can talk about my thoughts on teams tanking and it’s long term effect on competitive sports later. What does making scallion pancakes entail? It’s not much harder than making a regular loaf of bread. First, we fry some of our excess chives and scallions in the oil. Then you add this extra flavorful oil to our dough mixture. The only other tricky part is the special folding process. The best way to describe it is like an accordion. The rest of it comes pretty naturally. Roll the dough flat, and fry it in a skillet with oil til crispy on both sides.

I still am not sure what to classify it as. Dinner? Appetizer? A snack? I’m not sure, but why not all them. It’s tasty enough, that’s for sure. Best of all? This is really cheap to make. You probably have most of the ingredients already. You just need to go down to the market for like, $3 worth of scallions and chives (hey I was right when I guessed this). Truly a college student’s best friend.

If you aren’t ready yet and want IHOP pancakes, this might be what you were looking for. Or if you want something else deep fried, might I recommend my crab rangoon recipe? 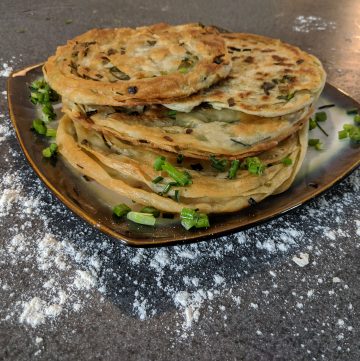