Sapporo is most well known for their miso ramen, as well as the occasional seafood ramen. However, it’s a huge city. With the fifth largest population in Japan, there’s bound to be a lot of variety. Sapporo tonkotsu ramen demonstrates that.

This ramen uses almost every flavoring there is. Starts off with a tonkotsu (pork bone broth) base, then miso paste and soy sauce are added. Most ramens will only use one of these! Needless to say, this thing is packed with flavor.

The first step to making this recipe is the tonkotsu broth. I’ve gone into depth on this before (see my Hakata ramen recipe). Basically, it will take a while. About 8 hours of boiling pork bones in a pot of water. There’s no way around this, Instant Pots won’t work. Don’t worry, the flavor is totally worth it.

Next, add 2 tbsp of miso paste and 1 of soy sauce. Now, depending on how powerful you want this Sapporo tonkotsu ramen broth to be, you might need to dilute with a little water. Give it a taste, see what you think. Sometimes, it can amazing at first, but it might be too heavy to drink a whole bowl of it. Trust your instincts.

Seafood flavors are loved in Sapporo, so I added some wakame (seaweed) as well. They only have to simmer for a few minutes. Don’t add salt until after this step. The seaweed brings some saltiness with it. I also added a little chicken fat I had.

I like to add a couple tablespoons of sake to finish it off. Mirin also works. This will add a little bit of sweetness, which will stop the other notes from becoming overpowering.

This one uses a lot of new ramen toppings for me, and I’m a fan of all of them (see my ramen guide to get a sense of most of them). It’s pretty crazy how different ramen can be in the same city, sometimes at the same shop!

Enoki mushrooms are popular in Korean cuisine as well as Japanese. They have a different appearance in the wild versus when they are cultivated. The white ones you usually see are the farmed ones, the result of not seeing light.

They can be eaten raw or cooked, I went with raw since I’ve never had them before. You can can make something called nametake by simmering them in soy sauce and mirin.

The most important thing is to separate the mushrooms and wash them individually. Also, chop off the bottom inch or two to get rid of the stems.

Most often, the protein in a bowl of ramen will be chashu pork, usually a belly, loin, or shoulder cut that has been braised for hours. For this Sapporo tonkotsu ramen, sometimes they will use minced pork instead.

There are a couple things I like about it. Obviously, you can cook it much faster. I also think you can experiment with the marinade a little more. If you leave it in the fridge overnight, the pork will soak up a lot of flavor. Spicy flavors work much better in minced pork than chashu too, in my opinion.

One thing I forgot to do, try and break up the pork with your hands before you start cooking. Otherwise, you might get these sausage balls like I did. Still delicious, but it would make the presentation look better.

Corn is a popular topping not just in Sapporo, but the island of Hokkaido in general. Last time I used the kernels, so I mixed it up and went with baby corn this time. The main difference is it’s crunchier, and it works well without butter.

The one style of ramen I didn’t talk about here, shio, is also found in Hokkaido. Or if you’re interested in more iconic ramen styles, check out the Kitakata version. 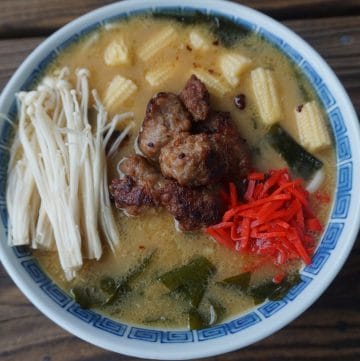