What’s the most American food you can of? I’d give it an 80% chance you said either a hamburger or French fries. However, other countries out there are reinventing fries in ways we never dreamed of. Salchipapas are one such invention, and this recipe shows no signs of slowing down.

Salchipapas are French fries topped with sliced sausage (sometimes hot dog), then covered in condiments like ketchup, mustard, mayonnaise, and aji chili sauce. Depending on which country you eat it in, there will be minor variations in toppings. Cheese, fried eggs, and coleslaw are all possible additions.

Where does the named come from? You might know that “papas” means potatoes. The other part is a shorthand for “salchichas”, or “sausages”. So, salchipapas is a portmanteau of the two main ingredients. It’s like breakfast and brunch creating “brunch”, or Goku and Vegeta creating “Gogeta”.

Where Did It Originate?

Salchipapas were first seen in Peru, and quickly spread to Bolivia, Columbia, and Ecuador (the bordering countries). Recently, Bolivian immigrants have made it a staple of Argentinian cuisine. The increase of Peruvian restaurants in the U.S. could make it as recognizable as ceviche in the future.

How To Make Salchipapas

This is a really quick recipe. Waiting for the fries to fry is the longest part. First, I’ll go over making fries from scratch, making some special condiments, and an optional coleslaw. If you are afraid of deep frying, you can always get frozen French fries and bake them in the oven.

What’s the best potato for salchipapas? Most French fry aficionados recommend russet potatoes, also called baking potatoes for some reason. The complex part is how do you want to fry them?

The most recommended method I’ve seen asks you to soak the potatoes for several hours, drain, pat dry, and then fry the potatoes twice, at 2 different temperatures! That’s a lot of work for something people crave the most when they’re drunk (not casting stones here, I might be one of them).

I settled on a really interesting method where you add the potatoes to cold oil, and they cook through as it heats up, then the outside crisps up at the end. You don’t even need a thermometer! The only downside to me, they didn’t get as crisp as I had hoped, but I did do a steak cut fry, which usually isn’t crisp. The upside, fresh fries in less than 20 minutes.

For the oil, use one with a high smoke point. This includes: vegetable, canola, sunflower, and peanut (for those ballers out there). Don’t use olive oil, it will smoke up your kitchen.

So, here’s the process from start to finish. Scrub your potatoes with water to get any dirt off. Either peel them or don’t (depends on if you want that rustic look), cut into fries, blot completely dry with a paper towel, then dump in a pot. Cover them with room temp oil, then turn the burner onto medium-high heat. They should start to brown in about 15 minutes. Remove once you are satisfied.

Remember to salt the fries while they are still hot and greasy, it helps the salt stick to them better. Also, line the plate with some paper towels to absorb the excess oil.

This is really simple. All you need to do is slice your sausage of choice (I would go with something precooked like hot dogs or andouille sausage) and brown it in a skillet with a little olive oil. You want to start cooking the salchichas when the fries are about halfway done. That way both ingredients in the salchipapas will be served hot.

Rather than add both ketchup and mayonnaise separately, you can combine them into a super fry sauce. If you want to do that it’s 2 parts mayo to 1 part ketchup. Garlic powder goes great with that as well.

Making your own aji chili paste is a little more complex, but I’ve done that before in this recipe if you’re interested. Any hot sauce will be an okay substitute for your salchipapas if you can’t find it though. Finally, you can either drizzle your condiments over the top of the fries or serve on the side in little ramekins.

For a simple coleslaw accompaniment, add a lot of mayo to a mix of shredded cabbage and carrots, some Dijon mustard, a few tbsp of apple cider vinegar, black pepper and cayenne pepper to taste. No need to measure this, just eyeball it, mix, and taste. 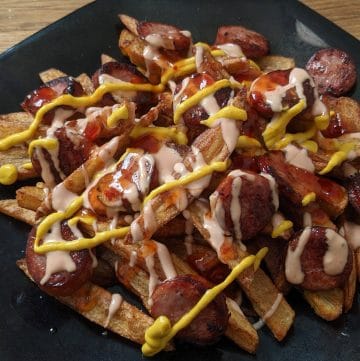