This isn’t a family recipe or anything. Most of the pies I had as a kid were store bought. Recently, I wanted to see if I could make one. I asked my mom and some friends about it, and they all said just use canned pumpkin. If I’m going through all this effort why stop short? I decided I would bake a pumpkin pie made with fresh pumpkin.

Why Pumpkin Pie With Fresh Pumpkin?

So I bought a pie pumpkin. That’s important, pie pumpkins are small and actually taste good. The big carving pumpkins are bad for pies, but good for Jack-O-Lanterns. Turns out, all you have to do, is cut it in half, scoop out the seeds and bake it for a bit. Don’t worry about getting the strings. There is way too many of them and it doesn’t alter the flavor of the final product. After baking, the pumpkin flesh is so tender you can peel it off the skin with your hands. You can easily mash it too, like potatoes. If it’s still more stringy than you would like, give it a quick blending. So it isn’t hard at all to create a pumpkin pie made with fresh pumpkin.

The end product is definitely worth it. There’s a lot more flavor than store bought pies. Using fresh pumpkin also really makes the filling shine. It didn’t feel like I was just eating a pie for the sake of it being sweet, it also really made me feel like autumn was here. Feel free to use a store bought crust though. Making that was a pain in the #$%! However, if you want an easier dessert might I recommend my grandma’s lemon bars? Or, if you want to make a pumpkin pie with canned pumpkin, check this recipe out instead. 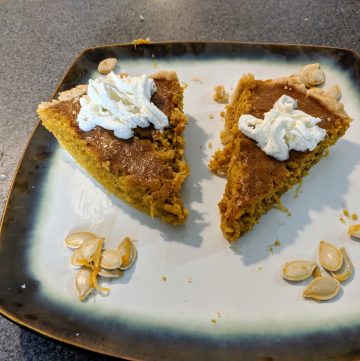