Palt is part of my ultimate dumpling guide, which has been a huge endeavor. There are some recipes I wasn’t able to make by myself, so my buddy Brenton stepped in! You might know him from the YouTube channel.

I haven’t made this yet, but Brenton has just as much culinary prowess as me, is a perfectionist, and takes better pics than me. Y’all are in good hands. Take it away bud!

Thanks Den! Palt comes from the universal human ideal of neat parcels of chewy dough delivering all that we desire in a single bite. Several if you’re making palt. These monsters are tennis ball sized by tradition.

Palt is a dish of deep winter, of staring at the last frozen bit of reindeer shank in your left hand and then your last two potatoes in your right. You would make a dough of the potatoes and flour from warmer times, and honor that reindeer by using every last bit of it, down to the blood.

You’d kick jack frost in his bitter cackling teeth by enjoying an enormous butter smothered dumpling, filled with steaming savory meat, in the dead of freeze your toenails off Winter. With a side of tart lingonberry jam and a tall stein of milk for good measure.

That’s how I imagine it and that’s where I’m coming from, a Floridian’s attempt at a beloved Swedish dish steeped in tradition.

The sight of Palt decked in glistening red lingonberry jam came up a lot in my research for this recipe. These cold-weather almost cranberries are a staple of Nordic cuisine and a solid marketing strategy at IKEA.

Yet somehow, I got the idea to try making a ginger beet jam. I guess because it seemed patriotic (the US gets a surprising amount of its refined sugar from beets). Also, marginally saner than cranberries in March.

Skip this step if you just want to use premade lingonberry jam. Looks like they sell it on Amazon.

If you somehow get tired of eating just the meat and potato, you can break a chunk off the palt and have it with some lingonberry jam and butter.

The pocket left by the meat is perfect to melt butter in. It’s like a specialized butter delivery just for your mouth.

The Swedish have a word for the food coma you get from eating too many of these.

If you want more dumpling recipes, check out my ducana (sweet potato and coconut dumplings). 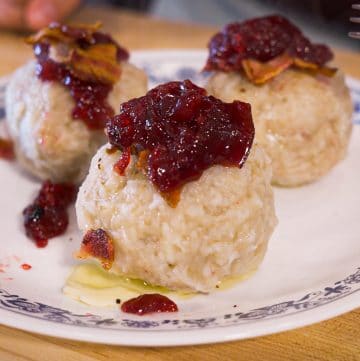