Onomichi is seaside city with a population of about 140,000. Situated in Hiroshima Prefecture, this city has access to the Seto Inland Sea. Onomichi ramen takes full advantage of the prevalence of seafood. See my ramen guide if that isn’t your forte.

This ramen isn’t made with chicken or tonkotsu broth. Most of the flavor comes from small dried fish that are caught in the Inland Sea, called niboshi. Add some soy sauce for saltiness and depth, and you have a fantastic seafood shoyu ramen.

This is completely different from all the ramen broths I’ve made before. It’s a really unique flavor. The soy sauce and pork fat enhances the taste of the seafood, stops it from overwhelming the palate. I love it, there’s a lot of layers of flavor from all the ingredients.

First, the niboshi. There are several different sizes of dried anchovies you can buy. I used the really small ones. If you use larger ones, use more of them than I did.

Next, is where I took a little liberty with my Onomichi ramen. I used mussel meat to add a new flavor as well as reduce the amount of niboshi needed. Frozen mussels work great for this. You can buy them without the shell. No need to defrost, they will just boil in the pot anyway and we aren’t eating them.

Bonito flakes are an optional ingredient, but I think they’re great. It adds some extra fishiness, as well as smokiness. It’s a dry ingredient as well, so bonito lasts forever in the pantry.

I didn’t have kelp so I used wakame instead. Normally, you only boil for 10 minutes if you want to eat the wakame. I’m using it for flavor here, so discard it after straining the broth at the end.

As you can see, the next ingredient is shiitake mushrooms. I recently learned that there’s actually 2 kinds, the American and Japanese varieties. They taste different, but both with provide the meaty flavor I’m looking to add here.

Sake is a common ingredient in most ramen broths. By adding it at the beginning, the alcohol will burn off and it will just add extra flavor and sweetness.

Why add the pork fat? A lot of ramens have a flavorful oil, this adds richness. The pork fat balances the seafood flavor and makes it more satisfying.

Last, is the soy sauce. Onomichi ramen is known as shoyu, but I think it would be just as amazing with shio (salt). The soy sauce changes the color of the broth, from clear white to a clear brown. I thought the clear white was a neat color.

The toppings for this are pretty simple. The broth is complex enough in my opinion, let that do the heavy lifting. Stick with a couple classics in chashu pork and green onions. Pickled ginger adds a nice tartness that contrasts the seafood flavors of the Onomichi ramen well.

This isn’t the same ginger you use for sushi by the way. It’s called beni shōga. It’s made with the same pickling solution as umeboshi, Japanese pickled plums. So, it’s a lot more tart and salty, which sushi ginger has a little sweetness to it.

A couple other toppings I recommend are: kikurage (thinly sliced mushrooms), umeboshi, nori, bean sprouts, spinach, and soft boiled egg. You could mix and match any of these. Have fun with it!

If you love seafood in your ramen, try my Sapporo miso ramen with squid and scallops! You think butter and corn would be a weird topping, but it’s honestly crazy good. Or, for a rice dish, try my seafood risotto with red snapper, clams, and mussels. I caught the snapper myself (during season of course)! 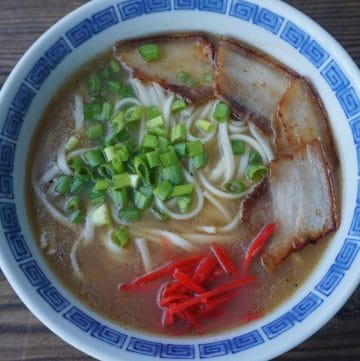