Nagoya is the 4th largest city population wise in all Japan. It is located in between Tokyo and Kyoto, on the central island of Honshu. Miso ramen reigns supreme in the north, and tonkotsu rules the south. What does Nagoya style ramen look like?

The most important features are: stir fried minced pork, chives, and a spicy chicken broth with chili oil. Soy sauce is the most normal tare added, but miso and shio can also be found in Nagoya.

The locals also call it Taiwan ramen, since it was created by a Taiwanese chef living in Nagoya. That’s why it bears a resemblance with tantanmen, a Chinese dish.

So, fun story. My apartment burned down so I lost all my ramen noodles. Maybe that isn’t fun. On the bright side, this means I had to make my own so I could make Nagoya style ramen. They honestly weren’t that hard to make, I’ll walk you through it.

There are only 4 ingredients: water, flour, salt, and baked baking soda. Yeah, you read that right. Ramen noodles are made with kansui water, which is an alkaline water. This gives them a slightly yellow color. So, traditional ramen noodles are vegan, even though it looks like they have egg in them.

You can buy kansui water in some grocery stores, but you can make do with normal pantry ingredients. That’s where the baking soda comes in. By putting your baking soda in the oven for an hour at around 250 F, you start a chemical reaction that makes the baking soda more alkaline than normal. Dissolve this in water, and you’ve made your own kansui water.

Now, it’s like a typical dough. Add the salt to the flour first, then little by little, mix the water in. You want to end up with a somewhat dry dough, if it’s too wet you’ll end up with soft noodles. We don’t want that in Nagoya style ramen.

Roll Out The Noodles

Once you have your ball of noodle dough, cover it with a damp cloth and leave it on the counter for 30 minutes. This will give you plenty of time to start the broth.

Next, dust a large surface with flour and roll out the dough in a large rectangle with a rolling pin. Cut off any stray edges here.

Sprinkle the sheet of dough with a lot of flour. Then, fold it in thirds. Last, cut it in very thin strips. Unfold the dough and you have a noodle! Keep doing this and sprinkle the noodles with flour to stop them from sticking together.

These don’t need to be boiled as long as dried noodles, only 1 to 3 minutes max. Pasta machines can help you do this faster, I found it a little hard to get a really thin noodle by hand. Great for udon or soba though!

You can start with either reduced sodium chicken broth or regular. Reduced sodium allows you to add more soy sauce, but you will to need to add salt as well.

Next, we want to layer our flavors. I added shiitake mushrooms, garlic, and ginger. It doesn’t need to simmer long, maybe 30 minutes. Just enough to let the flavors mingle. Add soy sauce as well, to taste. Keep in mind, the longer it simmers, the saltier it will get. Finally, add a little bit of sesame oil. The fat helps the broth stick to the noodles as you slurp.

There are only 3 mandatory toppings for Nagoya style ramen: chili oil, chives, and minced pork. For the chives, I recommend using a mix of fresh and stir frying some with the pork.

The pork is the complicated part, but this is way easier than making chashu. I marinated for about 2 hours, using a mix of soy sauce, mirin, salt, pepper, and something spicy (chili oil and sriracha both work). Add a little of your favorite oil to a skillet, heat up on medium high and fry your pork until all the pink is gone. Set aside. Stir fry any veggies you like in the leftover pork fat for extra deliciousness.

Finally, the chili oil. I like to add a big spoonful to each bowl after ladling the broth in and mixing it up. If you don’t mix it people will probably have a coughing fit within the first couple bites, which can be amusing. You can also add to the fiery redness by adding some more hot sauce or sriracha on top.

Visit my ramen guide for more tasty ramen recipes. If you’re more interested in appetizers, check out my dumpling guide with other 100 recipes from 45 countries! Or, for dessert try these 10 theme park recreations. 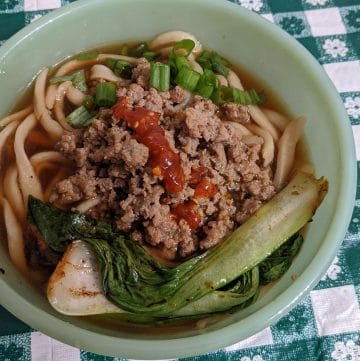