It’s been a while since I posted the ramen guide. My apartment burned down, my car got broken into, and at this rate, I’m expecting to get mugged or something before 2020 is over, haha. On the bright side, my new kitchen has more natural light, so that means better food pics! Let’s get to the makloub!

First of all, what is it? Makloub is a sandwich that is a popular street food in Tunisia. The bread is a special flatbread called msemen, with mayonnaise and harissa (a spicy tomato paste with garlic) as the condiments of choice. Toppings include: onion, lettuce, tomato, cucumber, bell pepper, and either grilled or fried meat (escalope). Or, I have a Portuguese sandwich that’s entirely meat if fresh veggies aren’t your thing. For something simpler, I have a Guatemalan hot dog as well.

Full disclaimer, msemen uses semolina flour, so technically mine is just going to be a flatbread. Semolina flour has a high gluten content by the way, for you those who are sensitive to that.

First step is to combine your dry ingredients. Also, make sure to stir them. It’s easier to distribute the salt and sugar evenly before you add water. Add the water and knead into a ball like most dough. Then, cover it with a moist towel for half an hour or so.

After you cover the dough, you want to season the chicken and make the harissa for the makloub (if you want to make homemade). Now, flour your work surface and smack the dough down like it owes you money.

You can add a little oil while working the dough here. I tried it without the oil as well, and I didn’t notice a large difference in taste. Roll it out once, then fold in back on itself, and roll it again. This makes it thicker and chewier, if you’re into that.

Poke some holes in the top with a fork. This prevents big air pockets from forming. Heat up a skillet on medium heat. Once it’s real hot, drop a blob of butter in there. After it liquifies, add the msemen. They don’t take long to cook, only a minute or two on each side. You will know it is done when you see a little bit of char. Let it cool before making the sandwich, the msemen will become more flexible.

If you aren’t in the mood for makloub, eating msemen by itself with a honey and butter dipping sauce is a traditional breakfast or tea time snack. Jam and cheese are popular in Tunisia as well.

Harissa is a very prevalent condiment in Tunisian cuisine. The ingredients are tomatoes, Baklouti peppers (no idea where to find that so I used serrano), garlic, olive oil, caraway seed, corriander, and cumin. You can shorten the amount of time needed by using tomato paste, but I’ll show you how to do it with fresh.

The prep is easy. Dice the tomato (add a second if you want to make more harissa for the future). Slice the peppers and keep the seeds in. We want that heat in the harissa. Mince 4 cloves of garlic. Next, heat up a little olive oil in a saucepan on medium low. Add the tomatoes and let them dissolve.

After about 5 minutes, add the garlic and peppers. Add any spices you like. Continue to simmer with the lid off, stirring occasionally so nothing sticks to the bottom. The tomatoes should fall apart into a chunky paste. Then, add salt to taste. I forgot to take a pic of the finished harissa but it looks tasty.

I used sautéed chicken cutlets for my meat. Another option you can go for is escalope, where you pound a meat flat, bread it and deep fry it. Sheep escalope can be found in Tunisia.

Chicken cutlets will be easier. Season with salt and pepper, as well as any seasonings of your choice. I added turmeric and garlic powder. I used some of the olive oil from my harissa for the sautéing. It added some extra complex flavors to the chicken. Once one side is done, flip and cook the other.

After the chicken is done, let it rest for a few minutes before cutting into it. This makes the meat juicier. Then, slice it across the grain so that it is a better size for the makloub.

First, take your msemen flatbread and slather it in mayonnaise and as much harissa as your tender tummy can handle (mine actually wasn’t very spicy). Use a lot of mayo. Next, add a layer of ricotta cheese. It’s the closest thing I could find to Tunisian rigouta, which is made with goat milk. This makes a huge difference, I tried it with and without. The extra fat makes this sandwich heavenly.

Next, add your makloub toppings in any order you’d like. Cucumbers, bell pepper, white onion, tomato, chicken, maybe even a little extra salt and pepper.

Last, cut it in half and share with a loved one, or if you’re lonely, wrap the bottom with foil and eat with gusto like the king or queen you are.

For more African flavors, try my Senegalese fataya recipe. Or for more street food from around the world, check out Peruvian lomo saltado or Chinese sesame balls! 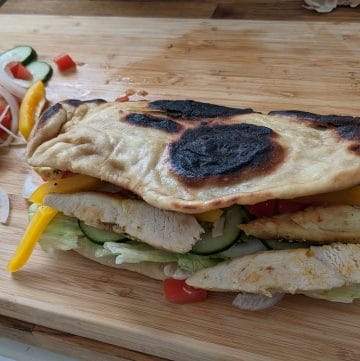