Kitakata is a city smack down in the middle of Japan, surrounded by mountains. It’s not a large city, less than 50,000 people live there. So, how did Kitakata ramen become one of the most influential regions of ramen in all of Japan?

I’ll start with a crazy statistic: there are more ramen shops per capita in Kitakata than anywhere else in Japan, roughly 120. People even eat ramen in the morning on their way to work!

As you can imagine, the diversity of Kitakata ramen is quite large. So, I will base this recipe on the most common one found in the city. A pork and soy sauce broth, with large, flat noodles. If that isn’t your jam, I’ve got you covered with more ramen recipes, fam.

The broth is fairly simple, but you can make it more complex if you want. I used pork broth leftover from making my Hakata ramen, added some soy sauce, and a little mirin for sweetness.

It is also common for Kitakata ramen to use niboshi, which are small dried anchovies. They give the broth a slightly deeper flavor, but are optional. If you want to add them, just simmer them in the broth for about 10 – 15 minutes and strain before serving.

This is just to give you an idea of what the pork broth should look like in the fridge. It’s solid because of all that collagen extracted from the bones, and that is very desirable for ramen broths.

The noodles for Kitakata ramen are the ingredient with the least wiggle room. You want “thicc”, flat noodles. I found that premade udon seemed to work as a good substitute. I’ll get to the handmade stuff in a future recipe, I don’t want to do that a dozen times.

Toppings will always vary from shop to shop, but a couple seem to be most common in Kitakata: char siu pork, scallions, naruto fish cake, and menma (fermented bamboo shoots).

I used some leftover char siu pork belly from a previous recipe, but I found shoulder is just as good with my shio ramen recipe from Hakodate. I’m sure you’re familiar with scallions, so I’ll cover the 2 toppings I haven’t used yet.

Fermented bamboo shoots are a common ramen topping all over Japan actually, not just in Kitakata ramen. I think they are best used in non-miso ramens, since miso already provides that deep fermented flavor.

You can buy menma premade, but I made a quick and dirty version. Stir fry regular slices of bamboo shoot with soy sauce and a little bit of miso paste. This brings out a salty, fermented flavor that will complement the broth well.

If you’re an anime fan like me, it’s our time to shine. Naruto Uzumaki, one of the most popular anime characters of modern times, is named after this unassuming fish cake.

I forgot to take a picture of it, but the fish cake comes in this skinny, foot long log. It should be in the frozen section of Asian grocery stores. It looks white with a pink swirl that runs throughout the middle. Supposedly, the swirls represent a real whirlpool you can find in Japan.

Most importantly, what does it taste like? It’s not a strong taste at all. A very mild fish flavor, similar to a fish ball. I think it’s a fun addition to any ramen bowl personally. It works even better in Kitakata ramen if you add the dried sardines as well. The fish flavors will enhance each other.

If you like shoyu ramen, I’ve made a shoyu ramen with turkey as well! For a Japanese recipe on my site that isn’t ramen (yeah they exist), try my akashiyaki (fried octopus balls). Or, if you’re just super hungry, I have a curry guide with over 100 curry recipes! 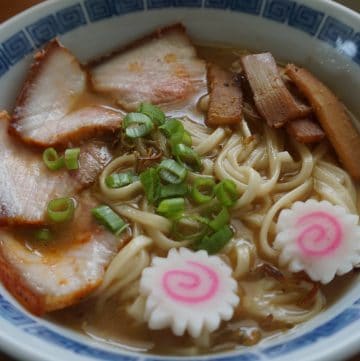 Recipe assumes premade char siu pork and pork broth. Full process for making both at home can be found in my Hakata ramen recipe.