Kagoshima ramen is known for their mild flavored broths. They focus on harmony, creating delicate balances of pork and chicken stock. A miso and tonkotsu fusion is enjoyed there as well, very different from the Sapporo version.

It is one of the few ramens in the region that have developed a style independent of Kurume. Their first ramen shop, Noboruya, opened back in 1947.

This ramen has chashu of course, as most do, but it also has a couple interesting ones. I’ll break them down (for more topping ideas, check out my ramen guide).

I found this topping to be particularly interesting. Green onion is an especially common ramen topping, but in Kagoshima you can find them slightly scorched. I did this by frying for a couple minutes in a skillet with sesame oil. Instead of the freshness they normally add, it’s more of a savory flavor. Also, you can add the leftover oil to the ramen as well.

There a couple different options for the mushrooms. You can use them to flavor the soup itself, use them as a topping, or both. Dried shiitake mushrooms are best if you want to flavor the broth with them.

For toppings, kikurage are the more traditional option. Also called wood ear mushrooms or Judas’s Ear (eww), they are a popular ramen topping when thinly sliced.

I couldn’t find kikurage at the market, so I used shiitake for this Kagoshima ramen. I lightly stir fried them with sesame oil and soy sauce. This makes them browner, keeping with the charred theme we have going on with our toppings.

Bean sprouts work well here. The other toppings all have a savory, charred profile, so adding raw bean sprouts brings some freshness to the bowl. It’s a nice little palate cleanser in between the bites of fatty pork.

For the chashu, I followed the recipe I used for the Iekei ramen. Searing the pork after slicing it makes it taste more like a really thick piece of bacon. This will make the meat tougher, but it works well with the roughness theme going on here.

To start with, you need to make a tonkotsu ramen broth. There are 2 methods you can use, the boil twice method I used in my Hakata ramen recipe, or soak the bones overnight and scoop the scum off while boiling, which I used for the Iekei ramen. For this Kagoshima ramen recipe, I went with the soaking method. It’s more labor intensive, but it gives you a more flavorful broth.

The broth can be stored in the fridge for 4 days or freezer for a couple months. Making the tonkotsu broth ahead of time makes it much easier to make the ramen. Plus, you will know if the broth is good if it turns solid in the fridge.

I added chicken broth in a 2:1 ratio, as well as dried sardines, sake, and a little mirin. This makes a broth that has layers of flavor, with none of them being too overpowering.

Traditionally, the noodles used are a little thicker than normal ramen noodles. I used premade udon, but you can also make them yourself with alkaline water and flour.

For you’re interested in a Chinese soup, try my recipe for wonton egg noodle soup. Or, if you are hungry for some appetizers, check out my dumpling guide with over 100 recipes from around the world! 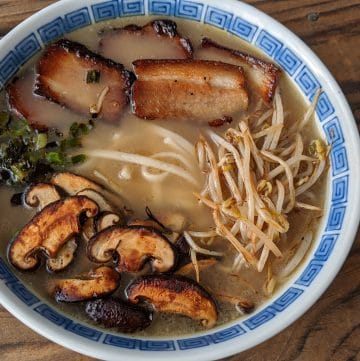 For how to make tonkotsu broth and chashu pork, follow Iekei ramen recipe.