Iekei ramen was invented by a shop in Yokohama, called Yoshimuraya in 1974. What makes this ramen unique? It was one of the first to blend different styles of broth, which has become more commonplace today (I have plenty in my ramen guide).

Tonkotsu (pork bone) broth is mixed with shoyu (soy sauce) to create a really rich soup. Combine that with thick noodles, that the broth sticks to as you slurp. Top it off with some chicken fat for an insanely delicious soup.

I went with a different method for making tonkotsu broth than last time, with my Hakata ramen. Before, I used a boil twice method with only pork bones.

Basically, you boil the bones on high heat for about 15 minutes, dump out the water, and rinse off the bones. This gets rid of most of the scum, but you lose some of the flavor this way. So, some ramen shops use a different method.

For Iekei ramen, I tried a new method. I soaked the bones in water overnight, which draws most of the blood out. Dump that water out and add new water to the pot. This way, you don’t have to boil twice, but you will have to scoop scum off the top occasionally.

I used a mixture of pork bones and trotters (feet), which will make the broth rich with collagen. How long should you boil for? The longer the better. The minimum is about 6 hours, every hour you go past that will increase the pork flavor and how much broth you will get. During the last hour of boiling, let the water level start falling to concentrate the broth even more.

You can add other ingredients to the broth as well. Leeks, garlic, and ginger are all common additions at ramen shops.

The toppings I used for this Iekei ramen aren’t uncommon, but I made them differently than I have in the past. I’m especially a fan of marinating the soft-boiled eggs.

For a regular soft boiled egg, you boil the egg for 6 minutes. However, a lot of ramen shops take their eggs to the next level. After shelling the eggs, they marinate them in a soy sauce based marinade for up to a day. The sauce gets absorbed by the egg, and changes the color and taste. For my sauce, I reused the sauce I braised the chashu pork with.

Usually I roast my chashu pork, but the average Japanese kitchen doesn’t have a microwave. So, I went with a different method, braising it on the stove. First, sear the pork on every side in a skillet. Then, put it in a saucepan with your marinade. I used a mixture of soy sauce, sake, mirin, salt, and palm sugar (brown sugar works too).

Cook the pork for 15 minutes, then flip it and cook the other side for about 10 minutes (will depend on the size of the cut of pork). Take the pork out and set the marinade aside. You can use it to marinate your eggs as well. Also, since it is mainly soy sauce, it works as the tare for the ramen too.

Before serving the Iekei ramen, slice the pork thinly, and sear it on each side in a skillet. I found this method makes the chashu taste like a thick, flavorful bacon.

Sometimes, ramen chefs will add a flavorful oil to the ramen. In this case, it’s chicken fat. You can buy chicken fat in a jar, or you can buy the raw thing and fry it for a bit to get the liquid. Once you have the chicken fat, fry some scallions and garlic in the fat to add more flavor. Take them out before adding the fat to the ramen.

You can boil or fry the spinach. Try to not overcook it, you want the spinach to keep it’s slightly bitter profile. I think it contrasts nicely with the thick and rich broth.

For something besides ramen, check out my dumpling guide or my curry guide. Both have over 100 recipes from all over the world! Or, if you’re in the mood for something sweet, check out my list of Chinese dessert recipes. 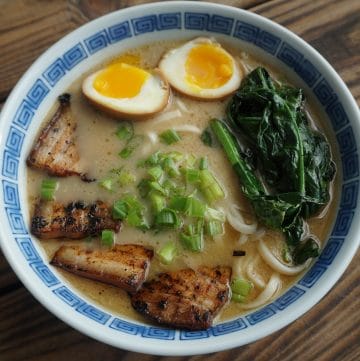