To be honest, I’ve never really watched a full episode of The Simpsons. I’m showing my young age here, but my first exposure to The Simpsons donut was at Universal Studios.

According to the Simpsons wiki, in a Halloween episode, Homer changes the past and comes back to the future. His family is rich and happy beyond their wildest dreams, but donuts no longer exist. Horrified, Homer goes back in time and changes things back. In another episode, he even sells his soul for a donut!

That’s how important donuts are to Homer. Lard Lad Donuts at Universal Studios serves a giant Simpsons donut, called The Big Pink. This monstrosity is a popular item at the parks. It’s tasty of course, but the hilarity of a donut this big and how Instagram worthy they are can’t hurt.

How To Avoid Messing Your Simpsons Donut Up

It took me 3 tries to get this Simpsons donut right. It probably didn’t help that I never made regular size donuts before either. On the bright side, you now get all this valuable info so you get it right the first time. Hopefully.

How To Activate The Yeast

If you don’t do any baking, odds are you aren’t familiar with how yeast works. I absolutely didn’t. First time, I just added yeast to warm water and thought that would activate it. This didn’t work. My Simpsons donuts kept coming out dense and raw in the middle.

You want to add sugar to the warm water as well. Yeast feasts on sugar, so this will really wake it up. Stir 2 1/2 tsps of dry yeast (or 1 packet) with some sugar and warm water. Cover with a damp cloth for 7 minutes. It should be very foamy. Giving off this gas lets you know that the yeast will add air pockets to your dough. If there are no air bubbles, your yeast isn’t active and won’t do anything.

Make sure to check your warm water with your finger. If it isn’t comfortable to leave your finger in the water, then it might kill the yeast. This would result in a very dense, probably under cooked Simpsons donut.

The Right Type Of Flour

I experimented with a couple different kinds of flour for this Simpsons donut. The one I found worked the best was unbleached all-purpose flour. Bleached should work too, just stay away from self-rising. If you’re having trouble finding flour during this pandemic, try a place people wouldn’t normally think of. My local Kroger was absolutely cleaned out, but Target had pretty much every kind of flour in stock.

How To Cook The Simpsons Donut

You need a big pot for this, plain and simple. I saw someone else recommended using a skillet and pan frying the donut. Horrible idea. This makes it dangerous to flip the giant donut without spreading super hot oil everywhere, let alone keep the donut in one piece. Donuts also need to float in the oil to cook properly, you can’t do that in a skillet. A deep pot will also give you more protection from oil spills.

How do you flip this monstrosity? You need some big metal utensils, 2 of them helps. I actually don’t own tongs presently, so I did it with a metal spatula. When it’s time to take the Simpsons donut out, it should stay in one piece if you cooked it through completely. I think the exterior needs to be a little browner than a normal donut to ensure there isn’t a raw dough interior.

When it comes to frying, it turns out low and slow is a really stupid idea. If the temperature is too low, the exterior won’t crisp properly, and the oil with penetrate the dough. It will be crazy greasy and not tasty. This giant donut does need a little extra time to cook compared to a regular donut though.

I found the middle ground to be about 340 degrees Fahrenheit. This is a little lower than you would normally fry donuts at. The exterior will still crisp up, but slowly enough for the middle to cook. Extra tip: fry the hole first at the same temperature you plan to fry the big one. This will tell you if the donut will cook right.

For another famous food at Universal Studios check out my recipes for every kind of butterbeer! Or for something from Disney, how about blue and green milk from Star Wars: Galaxy’s Edge! 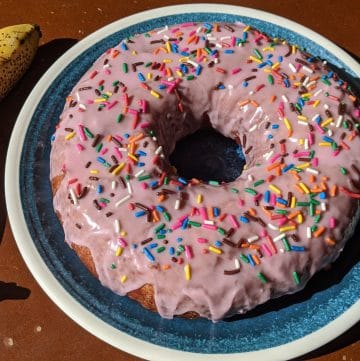