When you think pizza, where does Argentina rank on your list? If you’re like me, you probably think Italy, then New York, then your favorite local slice, then Cici’s or something. After trying my first fugazzeta, my world view of pizza has been shattered.

It’s not your stereotypical pizza. There are no tomatoes. At all. Instead, the pizza is stuffed with as much mozzarella as humanly possible (I hear some shops take pride in this). Then, on top, some onions are charred and cheese is toasted as it bakes in the oven.

Fugazzeta is actually a variant of fugazza, an Argentinian combination of Neapolitan pizza and focaccia bread. The inventor is believed to be Juan Banchero, an immigrant from Genoa, Italy. The first fugazzas were served at his pizza shop somewhere between 1893 – 1932.

They used the same ingredients, but fugazzeta is a variation where you make two layers of pizza crust and fill the middle with the cheese. It has become a very popular street food, a favorite of locals and tourists alike. You can find them stuffed with spinach and ham as well.

What Ingredients Should You Use?

The ingredients for fugazzeta might seem like a lot, but many of them are staples that you probably already have in the pantry: milk, olive oil, yeast, flour, sugar, salt, and maybe you keep some herbs. I’ve seen other bloggers say you need bread flour, but all-purpose flour worked great for me. The traditional herb would just be some dried oregano on top, pretty standard for any pizza. I added some fresh rosemary for some more visual flair.

The real decision is when it comes to the cheese. Mozzarella is a must, and parmesan on the top is pretty standard. However, I also added a goat cheese to the filling for a little funk. It’s completely up to you if want pure mozzarella or not.

This first step is the most tricky, especially if you don’t work with dough much. To activate the yeast, we need to use lukewarm milk (or water), and sugar. If the milk is too hot, it will kill the yeast and your dough won’t rise at all. Stir the sugar into the milk, then sprinkle the yeast over the top. Cover the bowl, and leave on the counter for 10 minutes. In the meantime, you can mix your dry ingredients together.

After stirring in your yeast mixture, add water bit by bit to your dough and knead for 5 to 10 minutes. You want a stretchy, but not too sticky dough. Inevitably, you will probably have to add a little more water or flour. Feeling it out is part of the fun of making dough! Once you are satisfied, cover your bowl and let the dough rise for an hour.

This step is a little weird to me, but you need to soak the onion slices in ice cold salt water for at least 30 minutes. According to Argentinian forum posts I’ve read, this is a crucial step in making fugazzeta. It makes the onions sweeter. So, if you are a fan of powerful onions, you could possibly skip this. If you do soak them, make sure to dry them with a towel completely after so they can get crispy in the oven. Also, you might want to slice them a little thinner than I did.

Split the dough into two equal sized balls. Take some olive oil and wipe down an oven safe skillet (if the handle is metal you are probably safe, if it’s plastic you it probably isn’t). Plop down one ball of dough and spread it over the bottom and up the side. Spread the mozzarella evenly, and add some extra feta or parmesan if desired.

Now, roll out the second ball of dough. You’ll want to flour your workspace and rolling pin so the dough doesn’t stick. Also, flipping the dough a few times will help with that too. Carefully pick up the crust and lay it over the top of the mozzarella. Pinch the sides of the two crusts together. Make sure you get a good seal so none of the cheese leaks out. You want that goodness in your mouth.

Finally, sprinkle the top with parmesan cheese, onions, rosemary, garlic, and oregano. Drizzle a little bit of olive oil over the top. Then, bake in a preheated oven at 450 degrees F for 20 to 25 minutes, or until golden brown on top. Slice into your fugazzeta and enjoy! 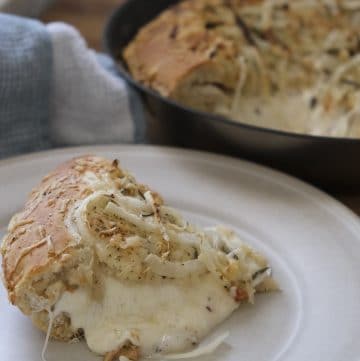 Make sure your skillet is oven safe before putting it in the oven.