Portuguese cuisine has a bit of a love affair with meat. So, it’s only fitting that they made a sandwich called francesinha, almost entirely out of meat.

This sandwich is incredibly powerful, it took me two tries to eat the whole thing. Also, I feel like my muscle mass has increased overnight. I feel like I need to do handstand pushups and run a couple miles. This thing will give you a bigger protein rush than protein powder, I’m serious.

What Is In Francesinha?

There is actually a wide variety of possible meats in francesinha. The most common meats include wet-cured ham, linguica, chipolata (a sausage), steak, and roast meat. Locals will argue endlessly over which restaurant in town has the best quality meats.

I took a little liberty and went with some more locally accessible meats: andouille sausage (just cause I really like it), chorizo for a little spiciness, and sirloin steak.

The tomato beer sauce is the other ingredient that separates good from great sandwiches. The recipes are a closely guarded secret. The spices and herbs used are a mystery outside of the kitchen the francesinha comes from. For mine, I used tomato sauce, beer, garlic, salt, pepper, and cayenne pepper.

After doing it, I think it’s best to make the sauce before making the meats. This way, you can leave the sauce to simmer and you’ll have hot meat on the francesinha sandwich.

My sauce is very simple, and surprisingly satisfying. Add a can of tomato sauce and 1 cup of beer (a lager) to a small pot on medium low heat. Then, add two cloves of garlic (sliced), salt, pepper, and some cayenne pepper. Stir it occasionally so nothing sticks to the bottom. Taste after a few minutes and adjust if necessary. Season your steak before all this by the way.

I think there is an ideal order to cook the meat in, if you want to do them all in the same skillet. Start with a little olive oil in the skillet on medium heat. Once hot, add the andouille sausage. Brown and flip. Should take like 2 minutes. Andouille is precooked, so we’re just adding more flavor here.

Now, add a tablespoon of butter. Slap that steak down (remember to season it first) and get a good sear on it. Tilt the skillet and baste the top of the steak with your butter. Once you have a nice crust, flip it and hit the other side. After you hit your desired level of doneness, take it off the heat. Don’t carve it. Letting it rest will make it juicier.

Last, is the chorizo. By cooking the steak second, you now have all this free flavor in the skillet. The chorizo will absorb all that butter and become a high point of your francesinha. You can let it sit a couple minutes without stirring. This way there will be some crispy bits mixed into the chorizo.

Buy a nice bougie loaf of bread. You can make your own, but I was tired from making the bread for my makloub sandwich. Now, you want to toast your bread. I’ve seen some people toast it with the cheese on top to melt it, but this will result in a soggy top piece of bread after you add the sauce.

So, separate your bread slices and put in the oven at 325 F. Check every now and then til it’s nice and toasty. You can pass the time by frying an egg for an optional topping. Take out the bread, and assemble your francesinha. Add some pecorino cheese on top of the bread. I chose pecorino because sheep cheese is the most popular type in Portugal. Pecorino is Italian, but it is sheep!

For more meat, try my Bulgarian kebapche (grilled kebabs) or spicy mapo tofu. Or once you eat this sandwich and need a meat free day, try my vegetarian beet succotash. 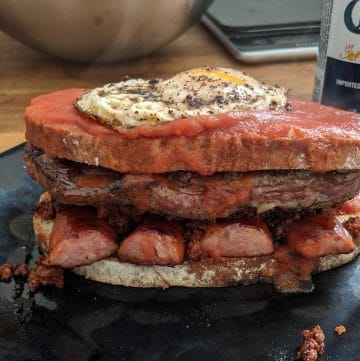