Ducana are from the island of Antigua in the Caribbean, but are also enjoyed on several other islands. They are part of my ultimate dumpling guide, so check that out if you haven’t had the chance yet!

There is a lot of freedom with what to put in these ducana. The only things that are mandatory are sweet potato, flour, and coconut. I used whole milk as well, but you can also use water or coconut milk. Whatever you have in your pantry!

I also wanted to give these a bit of a fruity note, so I added a mashed banana and raisins. You can add more or less sugar, if you want to make them more of a dessert or something like that. The only thing I would be careful of is the flour.

If you don’t add enough flour they won’t stay in a dumpling form, the ducana turn out more like the sweet potato casserole everyone has for Thanksgiving. Which still tastes good, just might be a little embarrassing.

First, wash and peel your sweet potatoes. Next, we need to grate them. I used a blender and added about 1/4 cup of milk to help it get started. You probably have to do one potato at a time and then empty the blender into a mixing bowl.

Try not to blend it too much, you don’t want a puree or pudding. Add it to a mixing bowl and start adding the rest of the ingredients for the ducana. Mashed banana, sugar, raisins, chopped nuts, butter, cinnamon, nutmeg, salt, shredded coconut, vanilla extract, and flour.

Last, start to form the ducana dumplings. The shape is up to you. I think medium size rectangles work the best, but I made giant balls out of habit. Most importantly, shape them with your hands. If the dough does not hold the shape like a dough would, there isn’t enough flour in the mixture, and the ducana will stick to the tin foil.

Now, submerge them in a pot of boiling water for 30 to 45 minutes. If you made big balls like me, let them go for 45. Traditionally, these are wrapped in banana leaves, but I think most people won’t be able to find that. Of course, the ducana would not stick to the leaves, which is nice.

Serve with saltfish for the optimum Caribbean experience. If you want to see more dumpling recipes, try my corundas, made with cornmeal, bacon grease, and jalapenos. 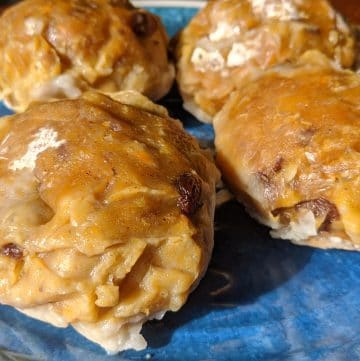