All the food at Dollywood is surprisingly fire. However, Dollywood’s cinnamon bread transcends what theme park food traditionally is. Some people come to the park just to get a loaf!

Imagine the tenderness of a pull-apart cinnamon roll, but the size of a single, giant loaf of bread. At the grist mill, they dunk the cinnamon bread loaves in a tub of butter and then roll it in brown sugar. If I didn’t have your curiosity before, I’m sure I now have your attention.

I will say, my recipe came out denser than expected. Dollywood’s is very tender and easily pulls apart with your fingers. Mine is better eaten in slices. I’ve tried it 4 times now, and I can’t quite get that texture. Don’t worry, it’s still freaking delicious or I wouldn’t bother sharing it.

I’ll take you through some of the ingredients and thoughts I had while trying to develop this recipe (I wanted to theorycraft it entirely by myself). I have a couple ideas how to get the same texture as Dollywood’s cinnamon bread as well. I’ve eaten 4 of these loafs over the past 2 weeks, so it’ll be a while before I experiment some more.

The dough needs to be buttery, moist, and sweet. This is a dessert bread we are talking about. So, I figured it would be best to minimize the amount of water used. Instead, use fatter liquids like butter, egg, buttermilk.

I think the buttermilk adds a bit of depth to the bread, a teeny bit of sour to counter all that sweetness. Plus, it’s just a cool ingredient.

For now, I settled on using just 1 egg. This is hardest point to experiment with. I’d like to try it with more eggs, no eggs, egg whites, and just the yolks and see how that changes things. I think the secret to getting the Dollywood cinnamon bread texture right lies here somewhere. This article about how eggs affect baking backs up my theory.

I’ve tried both salted and unsalted butter for this recipe, and either works in my opinion. Use what you already have. If it’s unsalted, just add more salt then the recipe calls for.

This was another struggle for me. There’s a lot of Dollywood cinnamon bread and bun recipes out there, and the baking temperatures are all over the place. I’ve read that sugar can burn above 350 F, so my last attempt was done at 340 F.

At higher temps, I’ve found the exterior gets crunchy. I don’t think that’s desirable here. One way to prevent that is to baste it in more cinnamon, butter, and sugar mixture periodically. Also, make sure to bake it on a very low rack of the oven!

First, we start with activating the yeast. As mentioned in my Simpson’s donut recipe, add the yeast and a tbsp of sugar to a little bit of lukewarm water. Lukewarm is crucial. Too hot and the yeast will die.

Test it with your finger (or a thermometer for the baking elitists out there) first to make sure it is comfortable. Cover with a damp cloth and leave in a warm place for about 10 minutes. Remember, without sugar, the yeast won’t have anything to eat.

Now, mix your yeast slurry with the other dough ingredients in a large mixing bowl. Again, make sure the butter and buttermilk are warm, but not too hot. Ideally, the egg would be room temp as well, but it isn’t necesssary.

Work that Dollywood cinnamon bread dough with your hands and knead it for about 10 minutes. Then, put it back into the bowl and cover with a damp cloth. Let it rise in a warm place for an hour and a half. Don’t worry if it doesn’t rise that much. My cinnamon bread has been rising a lot in the oven.

With a sharp knife, make 4 deep cuts horizontally across the dough after it is done resting. This allows the cinnamon, sugar, and butter coating to seep into the bread as deep as possible. Also, Dollywood does it. So I have to as well.

Melt the butter, and whisk in brown sugar and cinnamon until the mixture is homogeneous. Next, grease your loaf pan with either butter or oil. Then, roll the cinnamon bread loaf in the coating. Put the dough in the loaf pan and preheat the oven to 340 F. You should still have a decent amount of cinnamon sugar coating. Keep that around. We aren’t done with it.

At the 15 minute and 30 minute marks, take the cinnamon bread out of the oven and brush it with more of the cinnamon sugar coating. This will make the bread as moist as possible!

About 5 minutes before the bread is done, start the glaze. Warm 2 tbsp of butter and 4 tbsp of milk. Add in the sugar and stir until it is all dissolved. Take your Dollywood cinnamon bread out of the oven and drizzle on top while it’s hot. Or save it to dip with!

If you’re interested in other theme park recipes, try my s’mores fries and pizza fries from Universal Studios! For the Disney fans out there, try the pongu lumpia or the cheeseburger spring rolls instead. For the pie lovers, try this no bake key lime pie. 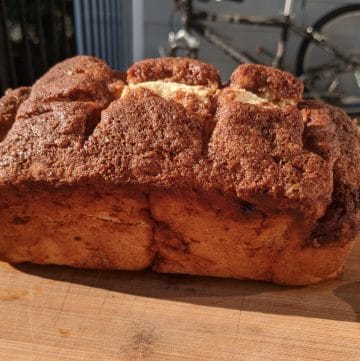