What made me decide to make a crab and sausage jambalaya? While visiting a friend last year, we went to a Sunday market. There were beautiful smells and sights everywhere, all kinds of food to try. I found a Cajun food stall, and decided to get some jambalaya. It was disappointing. The chicken was dry and not very flavorful. The sausage did not impress either. For some reason, it just felt very lackluster to me. I won’t say who the people were, I don’t want to put anyone on blast. But this event was the catalyst for my recipe. I knew jambalaya was delicious and that I could make it better.

First, full disclosure, I used imitation crab. I’m not making that mad blog money yet, and imitation crab is a guilty pleasure of mine anyway. If you don’t know, imitation crab is actually fish meat. And it’s delicious. And cheap. Shrimp are pretty expensive at my local market, being landlocked and all, so this made a great alternative. Also, as I mentioned before, having been disappointed by dry chicken made me hesitant to use it in my recipe. It is really hard to make dry fish. Probably because it’s wet all the time.

Anyway, I chose andouille sausage as my other protein. Why? Andouille sausage almost feels like a requirement to me in Cajun and Creole cuisine. I also got the extra hot version. If you can’t find it, I hear kielbasa works well instead. So now you know why I chose the ingredients I did, it’s time to talk about how to cook crab and sausage jambalaya.

First, we are going to season our sausage with salt and pepper. Pro tip, always season your meat. Makes it so much better. Then, put 2 tablespoons of cooking oil into a pot. Add your sausage and fry until it has nice browning on both sides. It doesn’t have to be fully cooked all the way, it will be added back to the pot and simmered for 30 minutes. The goal here is to create that flavorful brown crust on the outside of the sausage and to release some of that meat juice to flavor our veggies.

Next, remove the sausage from the pot and set aside. Keep the oil and juices in the pot. Dump in the Cajun holy trinity: onion, bell peppers, and celery. We want to saute this until the onion is a little see through. Again, just releasing the flavors from these veggies. Once you are satisfied, add the garlic and saute for another 30 seconds. Your end result should look something like this.

Now, we add the sausage back into the pot, along with the tomatoes, oyster sauce (or Worcestershire if you don’t have it), bay leaves, thyme, Cajun seasoning, salt, pepper, hot sauce, and okra. I suggest chopping the okra while you are cooking the sausage and the veggies. Start with the other veggies already chopped. It takes a lot of time to slice this much okra. If you are dicing onion while frying the sausage you won’t have enough time to chop your okra. We are going to let this cook for about 5 minutes, let everything get to know each other. Also, make sure to stir your ingredients in.

Finally, we are on the home stretch. Add your chicken broth and rice to the pot. Turn the heat to low. Let it simmer for 20-25 minutes. The rice will cook and absorb all the extra liquid in the pot. Try to come back and stir it every now and then. Even then, it’s possible some rice might stick to the bottom and burn. That’s okay. Mine did too. The rest of the rice is still fine, it just might be annoying to clean your pot at the end. Once your rice looks done, and feel free to taste it to check, add in your chunks of crab. I left mine in larger pieces so that it wouldn’t fall apart as easily. Feel free to chop it smaller if you like.

Last, let the mixture simmer another 6 minutes. All the flavors are going to combine and come out like Voltron. Before you serve it, be sure to taste it! Add any extra salt or spice you might want. If you want it to look extra fancy, garnish with some parsley or spring onion on the top. I hope you enjoy your jambalaya! If you want some more Cajun/Creole cuisine, try my Cajun-Chinese fusion gumbo! Or, if you want a traditional New Orleans favorite, try crawfish etouffee. 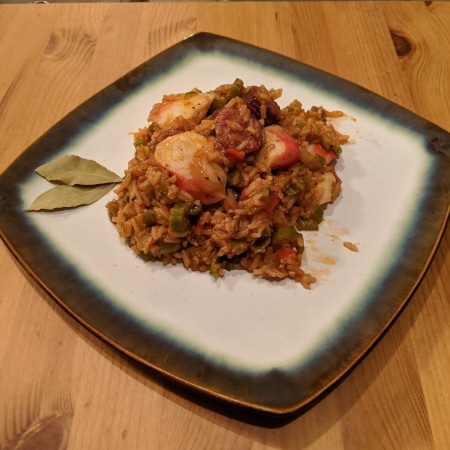