I recently revised this recipe after realizing that corundas are supposed to be made with masa harina, not cornmeal. Masa harina is a special corn flour, treated with lime water and used in tamales, tortillas, you name it.

I’m really I did, cause these are incredible now. Delicious on their own, but you can top them with sour cream, queso, or salsa to mix up the flavors. So easy too, great for a big family get together!

Corundas are sort of a Mexican dumpling, made with masa harina, lard, water, salt, and baking powder. They are then wrapped in corn husks and steamed. Unlike tamales, they do not usually have a filling, so sour cream or salsa provides the finishing touch.

I wanted these corundas to stand out. So, I substituted chicken broth for the water, used bacon fat instead of lard, and added diced jalapenos to the batter. The result is a slightly spicy corunda, that becomes divine when combined with the fat of the sour cream.

This recipe is part of my ultimate dumpling guide project. For other dumplings I’ve made personally from around the world, check out my siomay recipe (mackerel fish steamed dumplings from Indonesia). Or, for something deep fried, try my gulha (fried tuna dumplings from the Maldives).

If you don’t have anything to steam with, there’s plenty of options out there.

How to Make Corundas

This recipe can be easily multiplied, depending on how many people you want to feed. As a main course, I think this would feed 2 people. For an appetizer, this recipe would feed 4. Of course, it might be hard to get a lot of bacon grease, so you can substitute lard for that just fine.

First, pour 1 cup of masa harina into a large mixing bowl. No need to sift it. Add 1/2 cup of bacon grease and stir. It’s fine if it is still congealed, that is probably preferable.

Next, add the rest of the ingredients. 5/8 cup of chicken broth (or 1/2 cup if you feel lazy), 2 diced jalapenos, 2 cloves of minced garlic, 1/2 tablespoon of baking powder, 1 tsp of cumin, and salt to taste. Mix thoroughly into a homogeneous paste.

Folding these will be a pain if you are making them for a large crowd, so get an unsuspecting family member to help you. Ideally, corundas should be triangles, but whatever shape they come out as will be delicious.

If you are using dried corn husks, soak them in water for several minutes so they become pliable again. Then, put one corn husk on your plate. Put 2 tablespoons of batter inside, in a triangular shape.

Next, I folded the two ends down, like the first step in making a paper airplane. Then, I flipped the corunda and folded the husk back, finishing my triangle. Last, I wrapped a thin strip of corn husk around the package and tied a knot so it won’t come undone while steaming. You can use a string if you prefer. If you tuck in the bottom and it stays closed, you might not need the string.

Continue this until you run out of corundas batter, or out of corn husks. If using a bamboo steamer, I recommend putting down a layer of corn husks on the bottom. This will help with cleanup later if any of the batter spills. Try and lean the triangles against each other in the steamer to fit the max number in.

This dish is theoretically gluten free, check the packaging of your masa harina to make sure it isn’t processed in a facility that also does flour. There is bacon grease in this recipe, but you could try substituting for butter if you want to make a vegetarian version. Here’s a succotash recipe if you need that! Also, apple fries and banana fritters if you want something with a little fat.

The second time I made this I didn’t have enough bacon fat, so I halved that and added more chicken broth instead. It came out great, so no need to fret if you don’t have enough.

Keep the seeds in if you add jalapenos. The sour cream will neutralize some of the heat, so you can enjoy a pleasant spiciness even if you’re normally a spice wimp. 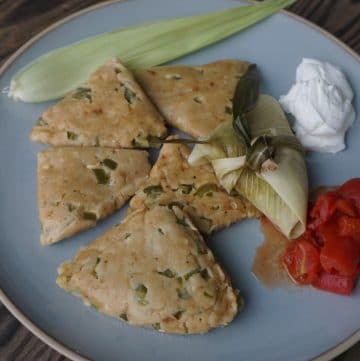