I learned of this Coca-Cola chicken wings recipe when I was talking to my friend Brenton. When I was a kid, my mom used to make this Jell-O salad with Coca-Cola. It was actually one of my favorite desserts, and I’ve converted many nonbelievers who doubt it’s deliciousness (I’ll get you too later). It made me think, are there other ways to use Coke?

Enter Brenton’s mom. Apparently, she used to make a chicken wing dish with Coke as the base for the sauce. I was curious, how would this work? Turns out, pretty good and pretty easy. The Coke reduces into a syrupy sauce, and the ginger accentuates the ginger flavors that are already in Coke. It tastes sweet, kind of like a honey BBQ wing, but with a little bit of bite from the Coke. If you are looking for a beginner recipe, this one is very friendly as well.

First, don’t flip the wings more than once. Let them sizzle for a little while so you get that nice browning. You don’t have to dice the ginger into tiny pieces. Rough looking slices will diffuse the ginger’s flavor through the dish just fine. You don’t even need to cut the skin off. Sesame seeds aren’t mandatory, but they do make a nice finishing touch, making the dish look fancy. Also, don’t use Diet Coke. If you want to make Coca-Cola chicken wings then there’s no reason to try to make them healthy. There’s not too many tips for this one. Again, pretty simple recipe, try it out yourself!

Finally, what if you are afraid to make Coca-Cola chicken wings? Alright, let’s get you started with other recipes that use Coke. Or, if you want something sweeter, check my French toast with bananas foster! 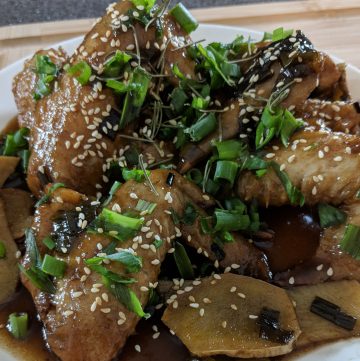