All around the world, countries are taking American culinary traditions, and reinventing them in unique ways. Cheeseburgers, french fries, and yes, even hot dogs. While we pay probably $7 for a standard frankfurter with mustard at a MLB game, Argentinians are probably getting 2 choripan!

What is choripan? In simple form, it’s a chorizo sausage on a French bread bun, covered with chimichurri sauce. The slight spiciness of the chorizo and savory chimichurri could convert even the biggest Yankees fan into a Messi disciple.

A Brief History of Choripan

What does the name mean? Chorizo + Pan (bread) = Choripan. Makes you wonder why a hot dog without the bun is still technically a hot dog.

When was choripan invented? Sometime between the Spanish colonization of Argentina and a picture of this street vendor cooking them in 1925. Turns out people have been putting sausage in bread for a long time.

Where can you find them? Today, you will see these tasty hot dogs at sporting events, hawked by street vendors, and made by families at asados (BBQs).

This recipe really simple. All you really have to do is cut some veggies and grill some sausages. If you don’t have a grill, I’ll show you an alternate method to make your chorizo on the stovetop.

This is the most important step. Chimichurri is an Argentinian institution, and it would be sacrilegious to leave it off your choripan. The 2 traditional herbs in chimichurri are fresh parsley and oregano. A lot of garlic is a must. You also need olive oil, red wine vinegar, and salt. From here you can play around a little. I added shallot and red bell pepper to mine for a little color.

If you are having a hard time getting the herbs chopped small enough, you can stick the chimichurri in the blender for a little bit. However, it might change the color from green. As seen below.

You want to make your chimichurri as far ahead of time as possible. The longer the flavors have to mingle together, the tastier it will be. This is because the flavors seep into the oil and vinegar which carries them to your tongue faster. I think… This isn’t a science blog.

I’ve gone over this before in my baleadas recipe. I know, you’re busy. Here’s the TLDR. 1/2 cup water, 1/2 apple cider vinegar, 1 tbsp sugar, 1 & 1/2 tsp salt. From there you can add whatever you want. I added rosemary, oregano, and cloves cause I had some lying around. This pickling solution works for anything too, not just onions. See my personal pickles below.

As I said earlier, choripan is a popular barbeque food. So, the best way to cook your chorizo (and hot dogs in general) is on a grill. However, I know many of you, myself included, don’t have a grill right now.

Luckily, I learned of a new way to cook sausages on the stove. Take a skillet and add about 1/2 inch of water to it. Add your sausage and heat up the skillet on medium heat until the water starts to simmer. You can turn the sausages every now and then while waiting.

Once it simmers, cover the skillet with a lid. This will gently boil/steam the chorizo. After 10 minutes you can pour off any remaining water and sear the sausages on the outside. I really liked this method. There is no risk of overcooking the outside and having a raw center.

First, toast your “hot dog bun”. You will thank me later. Slather on chimichurri on both sides of the bread. Cut your sausage in half and lay it on top. Add pickled onions and mustard, if desired. Enjoy! 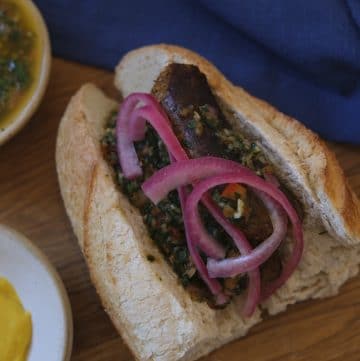