This chapalele recipe is part of my ultimate dumpling guide. Check it out if you haven’t yet! This recipe is also by my fellow brother in cooking, Brenton. You can catch him over on our YouTube channel. Take it away bud!

Chapalele hails from the island of Chiloé off the southern coast of Chile. Its name means “place of seagulls” in the indigenous language, which might give you an idea of the climate. Remote even by Chilean standards, graced with fjords both beautiful and isolating.

It’s no wonder that the people of Chiloé had to come up with a dumpling that’s as hearty as it is a snap to make. I decided to make my own pork crackling and serrano salsa/topping as an addition to my chapalele, but they’re great as a standalone savory dumpling.

Save the pork drippings for cooking/baking later! Caramelized onion would also make a delicious addition to the topping I bet.

I made really big chapalele in the pictures, in the future I want to either top smaller dumplings with single pork cracklings, or mince the crispy pork skin into rough cubes and speckle the top of the dumplings.

If you’re interested in other recipes by Brenton, check out his Swedish palt (potato dumplings filled with pork and topped with lingonberry jam). 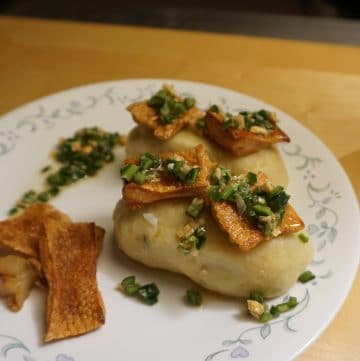