Grits are a well known breakfast food in the Deep South. What are they? Grits are ground corn, invented by the Native American Muskogee (Creek) Tribe. How did Cajun shrimp and grits develop from this?

No idea on that. Someone figured out that cheese, milk, and butter all enhanced the flavor of grits, which are pretty unassuming by itself. Similar to rice, grits will take on the flavor of whatever you add to it.

So, we are going to make an incredibly rich grits. How do we contrast that strong flavor? By adding fresh shrimp, sauteed in garlic and Cajun spices. The shrimp provide a nice little bite. Also, we are going to add a little lemon juice. These grits are so rich you need some acidity to cut through that.

Hopefully I can answer a lot of your questions here. If I’m missing anything, feel free to comment below! I check and respond to those pretty often. If you’re looking for a breakfast with less dairy in it, try my banana fritters instead. Or for a sweeter breakfast, French toast with bananas foster.

Why So Much Milk?

The milk is what will provide the creaminess of the Cajun shrimp and grits. I used whole milk, but you can use any percent. You don’t have to use all milk either. I’ve tried it with half milk, half water. This does lessen the flavor a little bit, but the grits are already pretty rich.

How Do You Know When The Grits Are Done?

You can always taste them. There’s no raw meat in the grits themselves, so the worst thing that will happen is tasting some grittiness (how under cooked grits taste). Another thing to ask yourself is could you eat that over and over. Sometimes the first bite is fantastic, but it would be too strong and rich for a whole plate of it.

My Grits Are Too Watery!

Try stirring and waiting like 5 – 10 minutes. Grits love absorbing liquid. If you still have a problem, you could add some cornstarch. Or even some more grits if you have the time to cook it.

My Grits Are Too Thick! (Thicc)

Add some more water, milk, or butter, whichever you prefer. Water if the flavor is too strong. Milk if you want some more creaminess. Butter won’t help too much, but will add a lot of flavor if that’s what you’re missing. Add maybe 1/4 cup at a time and give the Cajun shrimp and grits time to absorb it.

My Grits Are Too Rich

Add some more lemon juice. The acidity should counteract that. Also, try adding some black pepper. If all else fails, add some water, this should dilute it a little.

How Much Is Cajun Shrimp and Grits?

Depends on your geographic location, mainly how much the shrimp are. Here, I get a lb for about $7. A bag of grits lasts you a long time, and is about $4. The cheese will probably run you $8. So, I’d say overall about $20, with enough for 3 people. So, about $7 a person. Plus, you will have enough ingredients to make it a second time, minus the shrimp.

What To Serve With Shrimp and Grits

This Cajun shrimp and grits recipe makes enough for 3 that you don’t really need any sides. If you want to stretch it to 4, you could serve it with some biscuits, bacon (which would be delicious chopped up in the grits itself), and some fresh fruit.

Do I Have To Shred The Cheese?

Actually, no. I dropped my cheese in big blocks. Shredding it first will make it melt faster though. Also, you want to make sure the heat isn’t too high. Cheese doesn’t melt right when it’s really hot. You could also use all gouda, or all cheddar, depends on your preference! 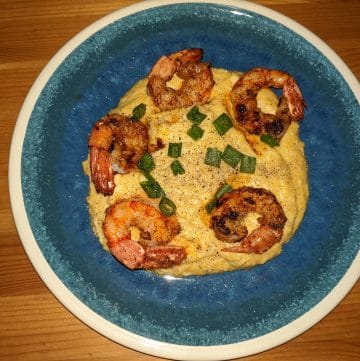 Comment below with any questions, or rate the recipe if you’ve tried it! I love getting feedback!