Blue and green milk are finally available in our universe! Since Galaxy’s Edge opened at Disney World in 2019, the milks are probably the most iconic food or beverage in the Star Wars expansion. Since Disney is closed due to COVID-19, I decided to recreate both of them at home.

I have tasted both of them previously, but it has been about 7 months, so I’m working off my memory here. To me, blue milk tasted almost like cotton candy, I’m not sure why. Green milk tasted very herbaceous and citrusy, almost like lemongrass. Both are thicker than regular milk, similar to a smoothie consistency.

The versions sold at Disney World are plant based, made with coconut and rice milks instead of dairy. So, my recipes will be vegan as well!

Blue milk was first seen in Star Wars IV: A New Hope, which is actually the first movie made in the series. According to Mark Hamill, the real thing was “Long Life” milk with blue dye. It was a beverage popular with campers because it didn’t need to be refrigerated. Mr. Hamill also said it was disgusting, and he had to fake enjoying it for the camera.

The version of blue milk served at Disney is much better. Much is known about the ingredients too. It uses a base of coconut milk and rice milk. The other flavors are dragon fruit, watermelon, and pineapple. I don’t know if Disney uses the fresh stuff, but might as well if you can find it. I also added a little vanilla extract. In my opinion, that made it taste a little more like the Disney version. You will need blue food dye as well. Otherwise, it is naturally pink.

I tried making it twice. The only mistake I made was adding too much watermelon the first time. It wasn’t bad, but that flavor overwhelms the drink, making it taste like a watermelon smoothie. I also used twice as much coconut milk as rice milk. Coconut milk is thicker so using more will result in a thicker smoothie, similar to the texture of the real blue milk at Galaxy’s Edge.

Green milk is a relative newcomer to the Star Wars universe. Its first appearance was in Episode VIII: The Last Jedi. Disney decided to show where it comes from too! Luke Skywalker milks the udder of this bipedal alien called a “thala siren” and chugs it unpasteurized, like he’s in a fraternity. It is either the best or worst scene in the movie, depending on you ask.

Less is known about the ingredients of green milk than blue. So, I decided to just wing it. I ended up using honeydew, banana, spinach, mango, and apples. Also some orange juice for extra citrus flavor. The cool part of this one is that you don’t need any food dye! The drink is naturally green cause of the honeydew and spinach. Not a power the Jedi would teach you (had to put a Palpatine meme in here somewhere).

Update: I’ve recently learned that the flavors are supposed to be mandarin, passion fruit, grapefruit, and orange blossom. So, I think we still hit the main flavors with the tropical, citrusy taste.

I didn’t have any issues with the green milk. The best tip I can think of is make sure your honeydew and mango are ripe. Unripe honeydew is the bane of my existence.

I think this was very close to the taste of the one sold at Disney. I couldn’t think of anything else that it was missing. Personally, I liked green just barely more, due to my love of ripe honeydew. My brother liked blue a little more, but exclaimed both were superior to the Galaxy’s Edge version! High praises!

A quick note, the calories for the recipe would be roughly halved if you are making only one of the milks. If you are interested in more recreations, I made a seafood miso ramen from Sapporo, Japan!

Also, a big shoutout to my brother Roy for helping me with the blue and green milk recipes, as well as inspiring the rest of my theme park recreations, including Butterbeer. He’s a theme park vlogger on YouTube with about 8,000 subs as I’m writing this. Check him out! This video is my first time seeing Galaxy’s Edge and tasting the real milks. 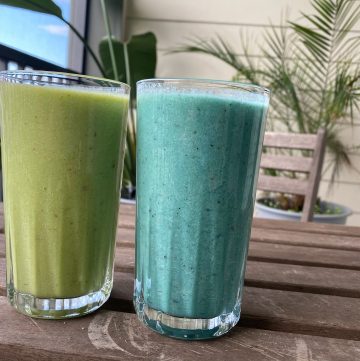