So, obviously some of you will wonder why I’m making beef korma instead of the well-known chicken korma. I just wanted to put my own twist on it. Plus, there’s a lot less beef korma recipes (taps head).

Beef isn’t eaten much in India, killing cows is actually illegal in 20 of its 29 states. This is because the Hindu majority does not wish to kill cows, which is great. But I am willing to. And so is the 11% of the Indian population that is Muslim.

You see, the Mughal Empire ruled most of India and Pakistan in the 16th – 17 century. The official religion was Islam, even though the majority of their subjects were Hindu. I won’t get into any of the problems that caused. This is a food blog!

Anyway, that’s my roundabout explanation for why using beef isn’t a violation of Indian cuisine. I got some terse words from someone for substituting gouda for queso fresco in my papa a la huancaina recipe. So if anyone gets angry, that’s ok. Just remember there’s more than one way to skin a cat.

You want to let your meat marinate for at least an hour. Let the flavor penetrate deep into the meat. Some liquid will probably be drawn from the meat because of the salt, which is expected. Pour out the liquid before moving the meat to the skillet. You don’t have to take it out of the fridge early, since we are just searing it.

You don’t have to cut up your veggies finely at all. It was my first time with this blender, so I wanted to take it easy. Some liquid in the bottom helps the blender, so you can throw in some olive oil and yogurt before the veggies.

What I’m about to say might be heresy, but here it goes: you probably don’t need all these spices. If you don’t have them already, then it’s going to cost you like $50 in spices alone. Garam masala actually has a lot of spices in it already. So you could just use garam masala, tumeric, curry powder, salt, and pepper. Also, anything with lots of spices and cream is going to be great, so don’t be afraid of not following the recipe.

So, this is what your curry should look like before the finishing touches. Always taste your food before it’s too late!!! In this particular test, I used walnuts, which I found gave off a bitter flavor. I had to add more sugar and cream to cover that up.

That’s why I’m recommending you use pecans instead. Or almonds, but every korma recipe calls for almonds and I like to be different. I thought this was pretty delicious, but let me know below if you agree or disagree! 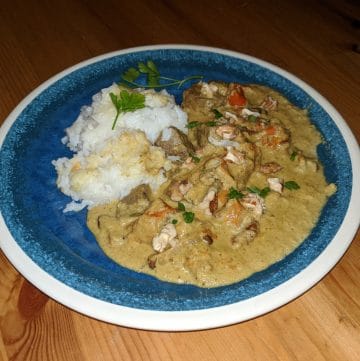 Get some spices yourself and start cooking! (doesn’t have to be here)

As an Amazon Associate I earn from qualifying purchases.