Asahikawa is a city on Japan’s northernmost island, Hokkaido. They have the most famous zoo in all Japan (Asahiyama Zoo)! However, for this article, I’m focusing on what makes Asahikawa ramen unique.

While you can find miso, shio, and tonkotsu ramen in Asahikawa, the city is most well known for a pork and shoyu broth (also with seafood depending on the shop).

8 of the most famous ramen shops in the city got together and made something called The Ramen Village. This Asahikawa ramen recipe is inspired by one of them, Santouka. Founded there in the 1980s, it has now expanded beyond Japan, to Chicago, New York City, and Boston to name a few!

What Is Asahikawa Style Ramen?

There are a couple things that make the ramen here unique. The broth is usually quite oily, with there being a layer of oil on top. Traditionally, this was a way to trap heat inside the bowl. Perfect for those cold Hokkaido winters (my ramen guide has lots of Hokkaido specials)!

Pork is usually the base for the broth, probably because there is a large pork farming community outside Asahikawa. Combine with chicken carcasses or fish to deepen the flavors before adding the soy sauce.

For the noodles, I’ve found sources that claim both thick and thin are the traditional version, so I went with thin.

The toppings are pretty common: eggs, char siu pork, scallions, and bamboo shoots. However, I noticed Santouka puts pickled plums in their ramen, so I tried that too! Only add one to your bowl of Asahikawa ramen. They are the most salty things I’ve had in my life! And I’ve drunk seawater before.

How To Make Asahikawa Ramen

There isn’t anything too crazy here. In fact, a lot of the ingredients I used were leftovers from making Kitakata ramen the previous day. I’ll run over how to prepare everything anyway.

You can add or subtract any ingredients you don’t like here. I started by making a pork bone broth (as shown in the Hakata ramen recipe). The process for that is about 12 hours, but you get a lot of stock out of it. Plus, you can freeze any leftovers and use them over the next few months!

Next, I added chicken broth, dried sardines, soy sauce, and mirin. This adds the chicken and fish notes that are present in Asahikawa ramen. You can simmer this as long as you like, being careful not to boil it. Keep in mind it will become more concentrated as the water evaporates over time.

For the layer of oil on top, I went with bacon grease. I thought this would make sense given all the pig farming. It also adds extra pork flavor that works really well with the ingredients that are already there. Alternate ideas for this would be a hot chili oil or maybe sesame oil.

I’m going to focus my attention on the more unique toppings for the Asahikawa ramen. I doubt you need me to tell you how to slice a green onion.

Japanese plums are similar to loquats if you’ve had them. They’re pretty common in Florida! When you’re shopping for them, look for umeboshi (their Japanese name).

They taste really salty and sour. So, be prepared for that. On the bright side, people say they are supposed to be healthy for you. Don’t they always say that for nasty stuff? I will say, when it’s the filling of an onigiri, the plums are pretty good.

If you like a softboiled egg with a really runny yolk, boil your eggs for 6 minutes. For a more set yolk, do 7 minutes. Past 8 minutes it should be completely solid. Pretty much every ramen shop serves them with a non set yolk. Bonus tip: put your eggs in ice water before peeling. Makes it much easier.

What is the best cut of pork for char siu in Asahikawa ramen? Since there is a lot of fat on the surface of the broth, I think a leaner cut of pork would be welcome here. I used belly, which is the opposite, but that’s cause I already had it. I think a loin or a shoulder would be perfect, and load the bowl up.

What is a good marinade? I have a theory that you want at least 3 flavors happening, including sweet, spicy, savory, salty, and sour to name a few. Always use salt and pepper, then you can experiment from there. Brown sugar, mirin, sake, Chinese 5 spice, garlic, peppers, soy sauce, oyster sauce, are all good ideas.

I have some large comprehensive guides if you are feeling really hungry. Check out my dumpling, curry, and Chinese dessert guides if you want to go down the rabbit hole! 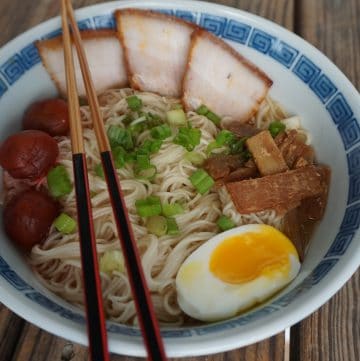 Recipe assumes pork broth and char siu pork is already made. Look at Hakata ramen recipe if you need info for making them.