This akashiyaki recipe is part of my ultimate dumpling guide. Akashiyaki is called “the grandfather of takoyaki”. If you aren’t familiar, both are basically pan fried octopus balls. So what’s the difference?

Akashiyaki has a higher ratio of egg to flour. Also, a simpler flavor profile. It is frequently served with a fish broth on the side for dipping. On the other hand, takoyaki has all kinds of flavors going on. Toppings too! Bonito flakes, mayonnaise, and eel sauce to name a few. I even saw cheese as a topping in Osaka!

So, why should you use octopus? Octopus is super popular in Japan. I had a great conversation at a bar in Kyoto while drinking sake with a Japanese businessman (I assume he was a businessman).

I had just downed some fried octopus balls with gusto, to his delighted amusement. He asked me, “Why do Americans not eat octopus? It’s delicious!”

To be honest, I had no idea. It’s just a cultural thing, I told him. Most Westerners I know have never had it. Myself included, until that moment.

Back to the akashiyaki. You will need a special pan to cook this, there’s no way around it that I could find. I looked at several Asian markets nearby. No one had it in stock, but they did have this weird one to make Dutch pancakes. Not wanting to risk it, I just got one on Amazon.

The reviews on this one were pretty good, and I was pleased with it overall. The nonstick coating was great. I made 2 batches of akashiyaki and it was still easy to get all the crusty dough off at the end.

Technically the instructions say to use their special butane stove only, but I put it directly on my stove burner and it worked out. Definitely not recommending you should ignore manufacturers guidelines. 😉

First, we are going to make the broth for dipping our akashiyaki. To keep things simple, I decided to start with premade chicken broth, but you can make your own. If you want to do that, this guy on YouTube does a great job!

I just added 2 cups of chicken broth, 1/3 cup bonito flakes, 1 tbsp soy sauce, and 1 tbsp mirin to a pot. Let it boil for maybe 10 minutes, then you can just let it simmer til you are ready for it. Strain the bonito out with a colander before serving.

Next, chop up your octopus. One tentacle should be enough to make 32 akashiyaki dumplings. Cut the octopus into small pieces. The length from your last finger joint to the end of your finger is about right (at least for my fingers, I don’t know what you’re working with).

Now, we make the batter. It’s kind of similar to a pancake, but with more egg, and a little soy sauce. Mix it all together in a large mixing bowl. Make sure to get any clumps of flour dispersed.

Brush all the little holes on your pan with oil, turn the heat to medium and wait a few minutes. You want the pan to get hot before you add the batter. Once it’s hot, fill all the holes halfway with akashiyaki batter. Add a piece of octopus to each hole. Then, finish topping it off with batter. It’s okay if it gets outside the holes, as long as it’s still in the pan.

Last, the only hard part of this. Flipping the darn things. I found the best practice is to make sure the pan was already hot before you added the batter. Also, medium heat will cook the bottoms faster, so they will become more firm and easier to flip.

On low, the batter will sort of steam, and you won’t be able to flip them or pick them up whole. A tiny skewer is best, but chopsticks work too. I suggest waiting until the bottoms got crispy, then work around the edges to loosen it. Then, flip it 180 degrees. The liquid batter on top will now be on the bottom, and you will get perfectly spherical akashiyaki. 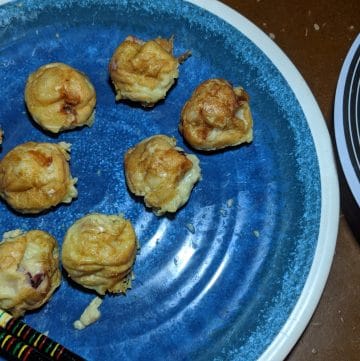